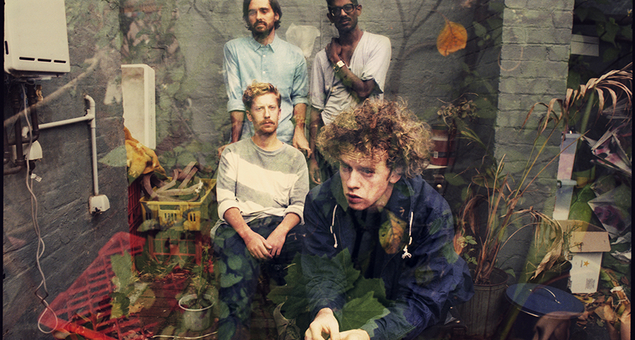 Before I go any further please hurry along and see of you can still get your hands on a 10″ vinyl pressing of Stray Currents. They’ve released limited numbers in three colours. Fucking awesome.  Okay…

Baptism of Uzi are a four piece that hail from the city that is generally regarded to be Australia’s live music capital- Melbourne. Although at first glance they may present like your typically cool and scruffy indie-rock quartet, take a closer look, because they’re much more than that.

The band’s sound is refreshingly genre defying. If I had to label it, it would be something in the way of dreamy psychedelic pop infused with early 90s garage fuzz. You know- that sorta thing. Mess and Noise agrees, dubbing their second EP and latest release, Stray Currents,

The five track EP was recorded in Melbourne and mixed by Gareth Parton, who has previously lent his skills to the likes of Spiritualized and Big Scary. You can hear the influence of that clean-cut production on this album, and it works really well against the backdrop of catchy hooks and satisfying guitar slides.

Their title track, Stray Currents, made it to FasterLouder’s top 30 songs of 2013 thus far-

Baptism Of Uzi represent the pinnacle of their genre – a genre of one. It’s post-Eddy Current garage, with the relentless drive of Krautrock and an inexplicable trace of lounge stirred in. Playing the genre game misses the point, though – just roll with it. What’s a stray current? No idea.

Catch these guys live later this month at Splendour in the Grass, and witness the genre defying madness for yourself.