Hugs Of The Sky have developed a mini-universe within their music. They’ve described it as a “post-apocalyptic balloon party,” and yeah,  that’s pretty bang on. Their songs are kind of like anthems for the armageddon; tunes that will leave you dancing joyfully into your final moments. And with something like coronavirus hanging over our heads, this is exactly the kind of music we need.

On their most recent single Beheaded Knight, the Belgian supergroup showcase their penchant for crafting fuzzy and effortlessly charming psych-rock gems that feel like they may come from another planet. If you’re not already across this band, now’s a perfect time to change that. 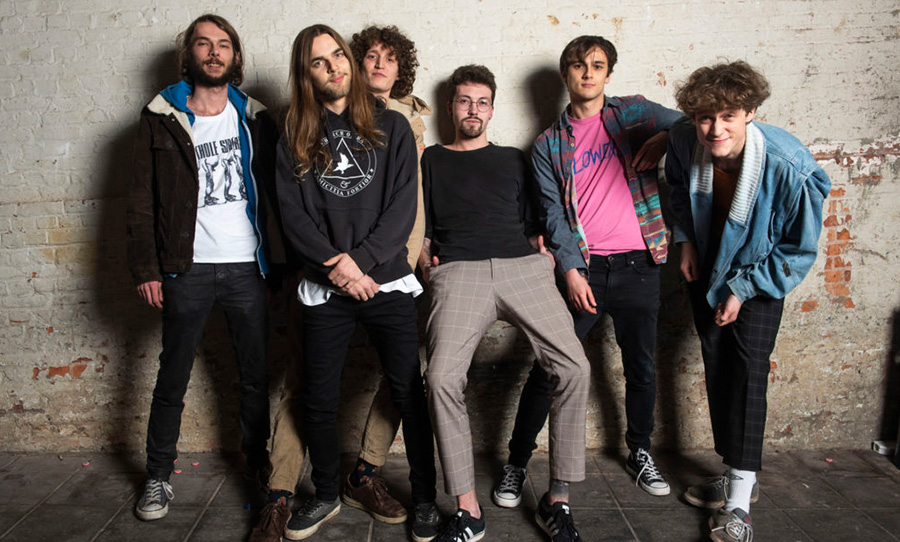 On their single Beheaded Knight, Belgian outfit Hugs Of The Sky deliver a psych-rock party anthem for the end of the world.

All throughout the new single, Hugs Of The Sky glide through a concoction of scuzzy garage and synth-tinged psych, delivering something uniquely their own. With crunching, lo-fi guitars and droning vocals, Beheaded Knight is an ocean of fuzzed-out sounds.

Over the course of its five-minute run-time, the track navigates myriad sonic spaces; it never sits in one place for too long. One moment you’ll be floating through woozy, effects-soaked vocal harmonies, and the next you’ll be getting smacked across the head by searing instrumental stabs.

The track’s accompanying video isn’t any less insane. Set in the mythic medieval cyberpunk kingdom of Garbago, the clip follows an unhinged knight who threatens to disturb the peace of this kingdom. Yes, it’s as crazy as it sounds.

This is the latest in a string of consistently great releases from Hugs Of The Sky, and judging by the quality of what we’ve heard so far, I think we can safely expect plenty more great tunes.

In the meantime, do yourself a favour and watch the new video for Hugs Of The Sky above.