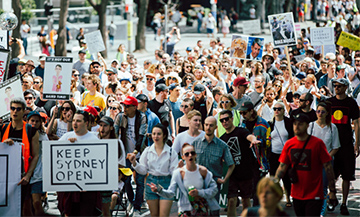 With iconic Sydney live music venues facing countless strict new rules and many even shutting down, the scene is in dire trouble. How is it that our neighbours in Melbourne are able to sustain a flourishing scene while our venues are being forced to shut down?

Noise complaints are one of many serious risks to Sydney’s dying live music scene. Keep Sydney Open have just announced a new core policy, ‘agent of change’, whereby live music venues are no longer to be held responsible for noise complaints. Instead, the onus will be upon new developments within the vicinity to create required noise attenuation.

Keep Sydney Open have announced a new core policy to take to election in February, shifting responsibility of noise complaints from live music venues to new developments in the vicinity.

Melbourne were one of the first cities in the world alongside London and San Francisco to adopt such a policy, and have become a global success story due to their vibrant music economy.

Keep Sydney Open is a political party with the core goal of reviving NSW’s cultural industries. Of course, the party do have a bunch of great policies surrounding major cultural debates.

Keep Sydney Open believe that as Sydney’s population increases in density, the noise issue will only get worse and as such needs action sooner rather than later.

It seems outrageous that a few annoying neighbours and nagging complaints are able to impact a whole industry and culture of a city. It’s time we do something about it. Keep Sydney Open will be running in the NSW election on March 23rd.