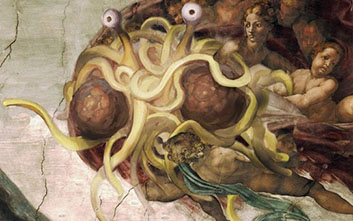 When you think about it, all religions are a bit strange. Not that we’re ones to judge of course, but for the most part that fact stands. Over time we’ve had some dodgy ones (we’re looking at you Scientology), but perhaps one of the most bizarre is the Church of the Flying Spaghetti Monster.

In case the name didn’t tip you off, the faithful here worship a giant monster made up of two eye stalks, meatballs and various noodle appendages. In a world where getting the government to recognise same-sex marriage is like pulling teeth, the devout followers of the church’s New Zealand branch have surprisingly gotten the go-ahead to legally perform marriage ceremonies. Many religious organisations retain the right to perform religious ceremonies, so why not a group who believes a monstrous concoction of pasta? Yesterday the church received word they had been approved to perform marriages after applying in November. The registrar-general of births, deaths, and marriages Jeff Montgomery said he applied relevant legislation when making his decision, believing that the church’s objective was to “Uphold or promote religious beliefs, philosophical, or humanitarian convictions“.

The Church of the Flying Spaghetti Monster has been around for hundreds of years but had operated in secrecy until an open letter was published in 2005. Pastafarians believe that human beings evolved from pirates, who were peaceful explorers and the first Pastafarians. The Flying Spaghetti Monster created the universe, and while there is no proof the church affirm that there are written accounts detailing the event. Amongst their many beliefs, Pastafarians maintain that upon entering heaven the faithful will be greeted with a beer volcano and stripper factory.

You can watch this video to learn more.

This story was originally seen on Vice.