BANNF, you beautiful son of a gun, you’ve done it again. The man has been playing music under this moniker for about a year now but has already cemented himself as one of the best young emerging artists to call Australia home. His crooning voice and penchant for knocking together killer indie-folk tunes has earned him that mantle, and after releasing some beautiful little numbers like Stand in Line and The Great Unknown BANFF is ready to announce his new EP Future Self, and to celebrate we’re premiering the first cut of the record All Again. BANFF is golden on All Again, a spectacular track that sees Benjamin Forbes continue to evolve his craft and leave us revelling in his subtle intensity.

Otherwise known as Benjamin Forbes, BANFF has crafted a moving piece of music with All Again. Suffice to say, within the realm of indie-folk there is a danger of repeating one’s self. I mean, how often can you croon over a synthesiser before it becomes old hat? BANFF finds the answer with his playful arrangements on All Again, which are ever so subtle yet surprisingly striking.

The track is driven by the tapping percussion which opens the track and doesn’t let up for a second. It’s a gentle beat, not pulsing but trickling through the motions. The piano and synth parts continually build on top of each other as the song builds its quiet intensity. The layered elements don’t come through until the final third of the song, but it’s well worth the wait. As BANFF sings “I’m used to it all again” the melancholy that had punctuated the track beforehand is slowly alleviated giving way to a much more hopeful atmosphere.

Oh and those vocals are a god damn delight. BANFF’s vocal delivery is timid at first but builds with confidence as the track progresses. It keeps with the themes of All Again; “I’m full of aching” he breathes out uneasily. There’s a feeling of confronting one’s self within the narrative of the song, as if you have walked in on a man who is staring down his own reflection.

It’s a theme that will be prevalent on Future Self, with the man himself stating “Future Self comes from a reflective time in my life, thinking about the choices I made and where they would lead me down the track. It was an overwhelming and vulnerable period into adulthood, but one that has taught me a lot as far as music, and life in general goes“. After working with Tom Iansek of #1 Dads, we can be sure this EP won’t be anything short of spectacular. June 19 can’t come soon enough.

BANFF is supporting Japanese Wallpaper at The Zoo in Brisbane July 2 before kicking off his Future Self tour. 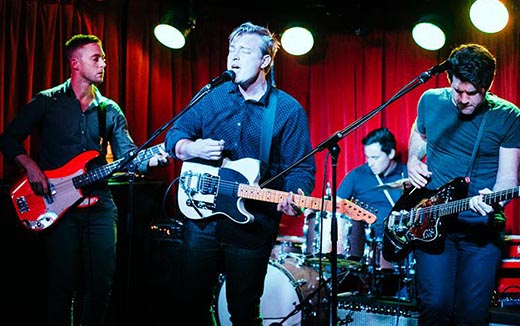 Fall into the daydream of Future Self from BANFF