There’s a fire that is raging across the nation, and it’s one that you don’t want to put out. The perpetrator is Ivan Ooze, and in the space of the last year or so has turned all eyes in the hip-hop scene on him. To put it simply the man is a beast. He’s toured non-stop, sharing stages with the likes of Cyprus Hill, Azalea Banks, Ice Cube and Seth Sentry on his monstrous 50 show tour.

His skill behind the mic is truly something else. This guy can spit like the best of them with plenty of energy and bravado to spare. The tracks you hear on Ringwood Rich EP and The Social Alien barely scratch the surface. Saunter over to his Facebook page and behold his clever off the cuff freestyles. Freestyling is an art form unto itself and not every rapper can pull it off, but Ooze does it with ease. With Ooze kicking off his Fire tour we had a peek behind that mane of hair to discover the tracks that have inspired his own unabashed flow. With a flow as steady as molten lava and a lyrical dexterity that is hot enough to put a supernova to shame, your boy Ivan Ooze reveals the 8 tracks that inspired Fire.

Jack U – Take U There

Eminem – Just Don’t Give A Fuck

Screamin’ Jay Hawkins – I Put A Spell On You

Scene Creamers – Better All The Time 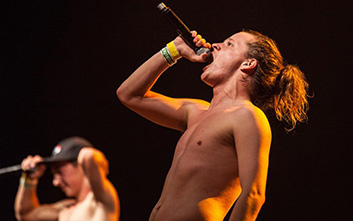 Ivan Ooze sets the Brighton Up Bar on fire