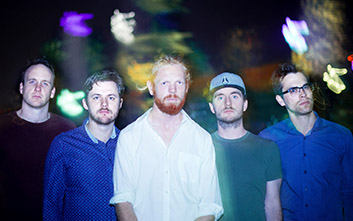 Breakups. We’d all like to believe that there’s some passive, mutually agreeable way to do it without leaving at least one person feeling like they’ve been smeared all over the highway for the buzzards.

In reality, it’s entirely probable that one or more parties will spend the next few days or weeks or even months wearing mostly sweatpants and finding anything more complicated than takeout and binge-watching sessions of reality television supremely challenging. For musicians at least, there’s an outlet that doesn’t involve alcohol or carbohydrates: songwriting.

Or, in Canary frontman Matthew Kenneally’s case, an entire album.

The result was I Am Lion, the long-anticipated follow-up to their debut album, Dear Universe, which was crafted from the backlash of a breakup. Smile is the latest track from this album to be given legs of it’s own – this time, in the form of a live video. With disregard for all embellishments, Melbourne 5 piece Canary presents a raw, soulful and powerful live performance of Smile – taken from their new record I Am Lion

Canary have a track record of going to great lengths to record videos, including jumping out of planes. But that was groove-filled Here We Go; here we have a track that’s all riddled with wistful angst.

Smile is the kind of melancholy tune that evokes the same height of emotion that skydiving might, without the danger. Instead, all that’s needed is a stage illuminated by bare, dangling light bulbs; slow pans of Kenneally’s magnificent facial hair; close-ups shots of carefully-plucked guitar chords.

It starts off stripped back – eerie vocals over gentle waves of guitar – then slowly builds. Kenneally’s moody voice rubs nicely against Ed Fairlie’s shrill trumpet, etched out with great cymbal swooshes from drummer Lachlan O Kane, and it dips back and forth into hip hop grooves before shrugging nonchalantly back into folk, gradually growing into what becomes this great, enraged swell of sound.

Something about the escalation in comparison to the album version sees this live one rawer, angrier – there’s an almost messy slosh of drums, until it collapses back, twisting like a magician’s trick, into quiet close.

A nod too to those lyrics, thick with sense and meaning that don’t just explore the darkness of relationships, but also religion – “Jesus broke my heart when I was only ten / I forgive him / it doesn’t mean we still have to be friends” Kenneally tells us, and they’re laced with despair and disappointment: paranoid thoughts unnervingly vocalised. PREMIERE: Manic, dramatic and heart-wrenching, Jack Colwell shines on Only When Flooded Could I Let Go Tropics' Rapture is a bleak yet beautiful breakup album