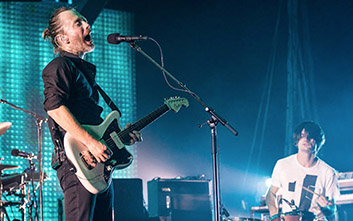 Since their surprise release of Spectre last December, fans have been waiting desperately for news of a new Radiohead album and tour. It seems the wait is over, with the band announcing a series of shows as a part of a world tour kicking off in May. Unfortunately, there have been no Aussie dates announced just yet. Also with the band playing in Europe throughout July it seems highly unlikely that they will be making an appearance at Splendour in the Grass. However,with the band ending their tour in October in Mexico it’s a safe bet that Thom Yorke and his merry men will be visiting us in the Summer.

In other related Radiohead news, the band unveiled a new piece of art on their socials last night, hinting at the follow up release to The King of Limbs. Until then, we wait and read over Pitchfork’s awesome list of potential new album songs. Overseas friends can catch the band on the below dates as they play Europe, America, Canada, Japan and Mexico. Watch Radiohead perfrom Spectre live for the first time ever The Bond theme that never was. Radiohead's Spectre is the song we wish we heard in the movie Ever wondered which Aussie bands would nail writing a Bond theme? Here are our top 12 picks