It’s crazy to think that lockdown could possibly evolve a band as polished as The Jungle Giants but, during last year, they reached new heights.

Cancelled plans, buckets of stress, and cabin fever like we’ve never felt it before. Last year was unhinged and dark, but this darkness seemed to bring out a light in many of us. We discovered a strength in ourselves that we hadn’t seen before, we found new passions, or we started to value the little things much more.

Just like the rest of us, frontman Sam Hales was confronted by a new reality, one that would shake many artists to their core. He was tasked with writing and producing one of Australia’s most anticipated albums in near-total isolation. Despite this, as he tells us, the challenge armed him with a new set of skills, a new lease for his music, and a fucking beautiful album.

We sat down with Hales to look back on the bedlam and beauties of 2020. HAPPY: I know that this year has been crazy for everyone. What has 2020 looked like for The Jungle Giants?

SAM: Well, it started off with one of the busiest times ever for touring for us. The start of the year was the Hottest 100, Heavy Hearted did really well. It was about three days later that we kicked off an American tour. It was actually the coolest week ever. We got top 10 in the Hottest 100, then we just got on a plane straight to America and then packed in a heap of shows. Snowy shows too because it was in January. We kind of saw heaps of America, we went to Mexico and then we went straight from Mexico to Japan and did some shows. It was a bit of a dream tour because we saw heaps of the world real fast and met up with all different friends around the world. And then, yeah, COVID hit just after we did our Japan shows, so we came straight back.

But as far as the year has panned out, the way that we had booked the year was so, so busy that I was worried I wouldn’t be able to finish the record. Full honesty, I had these tours all booked and had these little gaps of, you know, three weeks here and four weeks there. I still had a fair bit of writing to do and I produced and engineered this record all myself this time. It was all up to me to really decide, to be honest, if I was ready. You know, I nearly had to cancel a lot of the tours almost, but then COVID kinda did it anyway.

SAM: Yeah, it was pretty much all done, but you can never really bank on how long it’s going to take. I usually try to give myself a stress-free…. actually, I do love having a deadline. But then you also have to trick your brain to be like, “oh yeah, I’ve got all the time in the world.” I write more when I’m relaxed. So it’s a bit of a mental game. Before COVID hit, I was in the studio anyway and I did mixing with an engineer named Constantine. He lives in Brisbane, so I would usually fly up and we’d sit in a room and just mix and mix and mix. But we couldn’t, you know, all the borders started closing. So we did something super like high tech and it’s so weird. He set up a Zoom call, so I could be on Zoom just next to his face. So I could see his face and then we got a program where he could share his computer audio with me in real-time. So if he played like a kick drum, I could hear it at the same time as he’s hearing it.

SAM: Yeah! We just started mixing the record like that. It was a bit of a trial but, in the end, it worked out way better than we usually would work. Because he’d be there listening on speakers, really good speakers, and I’d be listening on headphones. I like mixing with headphones because you can hear reverbs or panning much more clear. It’s, you know, if the room is reverberating, you miss things. In the end, I think we doubled our speed and halved our time because he was hearing in the big boomy room and I was hearing the details. We loved it so much that we decided that we almost always want to do it like this from now on. So yeah, I just kept carrying on in the studio and it got to a point, because I live in Melbourne, there was an announcement where it was like, “you can’t go to work anymore as of midnight.” So I ran to the studio, filled all my stuff into my car and then I set it up a makeshift little studio. Kind of writing/demoing room but also like just for the production and things, and that became the studio. I just did it in my house pretty much, all through lockdown. So that’s the record. HAPPY: It was crazy how things worked out like that this year.

SAM: I know! I went crazy because there was a point where my girlfriend went up to Brisbane and kind of got stuck in Brisbane for a while. So I was alone for a couple of weeks, just working on the record. I have a good routine where I start at the same time every day and have a lunch break, and then stop at the same time. It’s the first time I’ve ever made a record without being in a studio with the band or having an engineer sitting at the control desk. I was doing like the vocals on my own and then pausing and being like, “oh do it again.” And then, you know, it just became like this really interesting challenge where I had to trust myself and also, not to be complacent. I think I’m really happy with that, because I really think I was honest the whole time. I reckon it sounds awesome, it’s exactly how I would have imagined it. I’m super proud.

SAM: I was going crazy there for a bit when it’s like, “what’s this, is this good? Or shit, or?” You know what I mean? I realised that’s probably the one thing I miss the most, is having someone in the room being like, “oh yeah, that’s shit. Or no, yeah that’s awesome.” You know, sometimes you need that extra voice. But I made it to the end and the record’s all done now. I feel like I really needed that time and the record is better for it now.

HAPPY: Did you find that lockdown ended up having any impact on the themes that you explored in the songs?

SAM: Kind of, actually. There was a bit where I wasn’t feeling as inspired as usual. Obviously just because our lifestyle changed and we weren’t doing gigs, we weren’t seeing my friends. But I did find that I got engulfed deeper into the production of things a little. I had a bit more time to really play around and I did a lot of playing and listening back. I feel like I had more time to do that than I have before. I think one thing that the record’s done now, is I find it really playful in the production. For me that’s really important. It’s like, you hear a little sound here and a little ding there, and it’s weird little custom copies and things like that. For me, that makes it musically colourful and I got to go a little deeper in that, because I had a bit more time and the deadline kept blowing out and blowing out. I was like, “oh cool, well you know what?” I had this idea that I was going to put on a seven-part harmony at this one point in the verse. “Now I have time to do that, so I’m just going to do that all day you know.” I think there was more time spent, it wasn’t too much time, where I started overdoing things. It was more, I just got to play with things and then I’d be like, “okay, that sucks. Next thing.”

HAPPY: Yeah, well it must have been amazing having that DIY ethos come into your workflow a little bit?

SAM: Yeah, I loved it. I think it’s definitely changed how I’ll do records in the future because I feel way more self-sufficient. I don’t feel like I have to be constrained to a big studio or, you know, have to go into the studio with someone to mix it. It’s just given me complete freedom and when lockdown’s over and when things are back to normal, I’ll have these cool new chips on my toolbelt! HAPPY: Well what’s next on the table for you guys now that things are slowly coming back to normality?

HAPPY: Yeah totally, well thank you so much for the chat Sam.

SAM: No, thank you. I appreciate it!

Check out their latest single In Her Eyes here 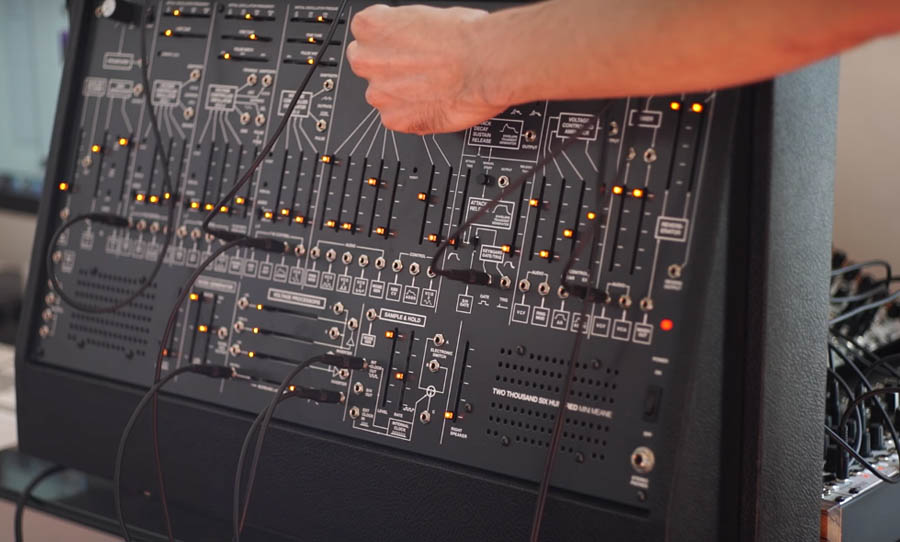