You’re sitting on the train and looking for something to do. Lord knows you won’t speak to the stranger next to you. No, that’d be weird. Instead you whip out your handy mobile telecommunication device and load up YouTube, chances are these awesome music videos have kept you entertained. If not, well luckily for you we have them here in handy listicle form. We love our music videos. Whether it’s about space adventures, cubism or terrifying your own reflection, here are the 5 best music videos you can’t miss this week.

It’s not often a music video will actually forsake the actual music, but the directing duo of THUNDERLIPS are the types to throw convention to the wind and find something new. Molten Lava is a groovy disco track which is subverted by the almost silent video, which is very familiar to a Robert Redford movie, just replacing a 70 year old man with a cute girl.

Much like his latest album Life Death Time Eternal, Tuka is blasting off into the stratosphere in My Star. A little more joyful than Muse’s space-faring Sing For Absolution clip, the playful atmosphere of the song is translated well to the atmosphere-less setting of the video.

This isn’t just a music video, this is on the level of a short film. The rap collective known as Goodbye Tomorrow tend to remain anonymous, and they use this to their advantage to construct some pretty powerful visuals of socio and political isolation and discrimination. Not to mention the totally badass cyborg who plays our bad guy.

Death Bells – Come On, Feel The Come Down

Sydney’s own Death Bells have been on the rise of late, their sophisticated indie rock and personable lyrics make them one of the best local acts to keep an eye on this year. The clip for Come On, Feel The Come Down is a frantic one, a raw look at a mind in disarray. When you think about it it’s just a guy wigging out in a bathroom, but the clever camera use and cuts make it an intense experience.

What do you get when you throw together a bit of Cubism, Kraftwerk and Eagles of Death Metal? The video for Complexity is one of the most fun jabs at abstract music videos we’ve seen in a while. 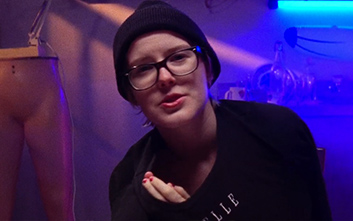 PREMIERE: Disco, the ocean and one girl on a yacht, what could possibly go wrong?