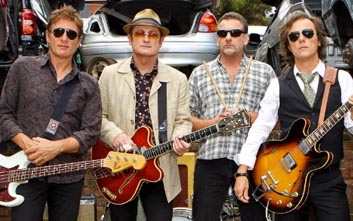 Wineries around the country are gearing up to put on some pretty huge shows as the Day On The Green folk announce a massive trio of headliners set to play the festivals next March. Influential Aussie indie legends Hoodoo Gurus, the Sunnyboys, and American alt-rockers Violent Femmes lead the announcement as 5 wineries around Australia prepare to become full-blown rock ‘n’ roll venues. Starting out at Bimbadgen Winery in the Hunter Valley NSW on Saturday March 5th, the festival will then make its way around a solid chunk of Australia, hitting up the Yarra Valley in Victoria, Launceston in Tassie, and King Park and the Botanic Gardens in Perth. Sydney 90s rockers Ratcat and 80s alt-rockers Died Pretty will be in support as well.

A Day On The Green is a BYO picnic rug and food, but no booze is allowed to be taken in.

Tickets go on sale via Ticketmaster next Friday October 23rd at 10am. A-ha and Rick Astley are touring Australia together! Get out your daily planners: The Gum Ball have dropped their full 2019 program