On the eve of ‘The Real World’ release, Freya Josephine Hollick and Alan Power sat down together to discuss everything from Aliens to God.

The Real World, is the brand new long-player from Australian country outlier Freya Josephine Hollick. Thrown into tumultuous times as the pandemic wreaked havoc every which way but up, Freya took it in her stride and discovered that the challenging times only further steeled her resolve to find her place in this new real world.

Hollick used the time to think about the planet, environment, societal unrest, the intimacy and complexity of our relationships, inclusiveness, empathy, and matters that continue to challenge our existence. The result was a new body of work that came to unfold, in all places, the Mojave Desert, that showed Freya a future that was worth fighting for. 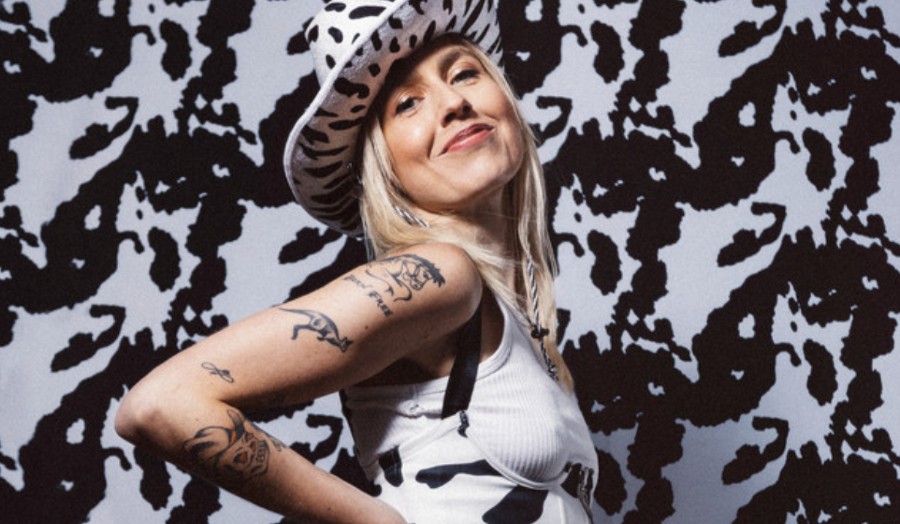 In 2019 Freya set out to the Californian desert to record at the studio Rancho de la Luna. Joined by some of her childhood heroes, Lucinda Williams’ band Buick 6 and renowned guitarist Greg Leisz (Eric Clapton, Beck, Sheryl Crow, Emmylou Harris et al) to cut what would become The Real World.

Looking back at that time Freya shares, “I ended up there in the Mojave desert, like the universe had called me there, to be there with those people. It wasn’t a place I chose, the place chose me, the wonderful people I worked with chose the band, chose the studio, chose the place, and I showed up.”

She continues, “The indescribable feeling of playing with musicians I had listened to since I was a child, singing into a microphone and sleeping in a bed recently sang in and slept in by Iggy Pop, I pinched myself every day. It was deeply emotional, I found myself on the cusp of tears at every turn. That desert is a powerful place, with a powerful history that stretches so far back before the capitalist machine put its devastation there. The death place of Gram Parsons and a good place to go looking for Aliens, I felt so at home, I can’t even explain it.”

Once the recording was over, Freya returned home and settled into what she refers to as the great revealer aka Covid Lockdown.

“For so many 2020 was just a write off, for me it was the great revealer. Everything just became so undeniably clear. Things I had let slide for years, came face to face with me. I sat in deep reflection for months, walked 10km a day, listening to meditations, sitting in the bush and singing to the water, and listening to the trees.”

In the gap between 2020 lockdowns, Freya kept busy, releasing Impossible To Love, a reclamation of sound and purpose and The Real World, that laments a planet so sick it can’t breathe, where “the sky has turned to fire”. Aching and punctuated by her pure and fragile tone, the song orbits in an ether of sullen strings and bawling steel guitar. The palpable sense of loss permeates as it’s stretched across Hollick’s textured cosmic country canvas.

Hollick’s first release, Nobody’s No Better Than No One was the first taste of the new album. The single was heavily influenced by Gene Clark’s hallowed 1974 album No Other, and if you have caught the HBO series The Flight Attendant, then no doubt you will have heard the blending synths, affected vocals and dusty rock guitars.

In a gorgeous duo with Alan Power, and inspired by the late great Allen Toussaint, the rolling Holdin’ on the Ones You Love suggests a simpler time, as lovers bask in the familiarity of one another. The duo reminds us to hold on to the good times, and to give gratitude because “before you know it they’ll be gone.”

On the final journey toward the release, the growth Hollick has experienced is palpable. “I can feel this album as another preface to something of much greater scale and importance. I feel it is my duty here to send out a vibration, to invite people in to be a part of a community, to do away with the “country music is for rednecks” narrative, and try to initiate change in the only way I know how.”

Freya poetically concludes, “Life without reflection and improvement is purposeless, so music must invite people to reflect, it should invite people to feel and to feel seen and safe. The Real World is a collection of songs that have grown to mean a great deal to me, and that is intended to question everything.”

Alan Power, the cowboy crooner is an artist known for both showmanship and unpredictability.

Following up his acclaimed 2019 debut album, Greatest Hits Vol.1, his sophomore album, Songs To Break America released in 2020 tackles feelings of impending doom, fear and the anxiety of things beyond our control. Alan: What is success?

Freya: Success, as it’s viewed en masse, is a mythical concept created by capitalists to force humans to overwork themselves and remove them from the treat of thoroughly enjoying the experience of living.

Always striving for more leaves us bereft of the beauty of the present moment, thusly, we are left empty with the illusion of success as our only bastion of hope.

Success as I view it is more about realising our true spirit. For me, it involves fully realising my motivations for making art, and if the motivations don’t align with who I am at my deepest spirit, then it needs to fall away. I consider success a process of allowing that which is impure/ not needed/ ego-driven to fall away, and be replaced by noble pursuits. This is, however, a constant practice, and something I have nowhere near mastered.

Freya: Gene Clark, the most underrated, skilled songwriter of all time in my opinion. Check out his song With Tomorrow if you want your heart completely obliterated.

Townes Van Zandt for obvious reasons, undeniably one of the greatest poets of the outlaw country fold, and of any other fold for that matter. Modern day Dylan Thomas in a cowboy hat, fuck yeah.

Dolly Parton who is second to none in the prolific nature of her songwriting, her incredibly clever, heartbreaking and often hilarious lyrics. Probably my biggest inspiration on the songwriting front. But then, who doesn’t adore Dolly, she is a legitimate earth Angel.

Alan: Do you believe in God?

Freya: I believe with our tiny human brains we don’t have the capacity to fully understand what the universe is all about. I don’t believe in any one god, I believe we are all intrinsically connected in an eternal hum of energy. I believe we live multiple lives, either one after the other or simultaneously, I believe fairly deeply in reincarnation, and cellular memory. I also believe that the universe holds many other forms of intelligent life in various stages of growth and decay.

Alan: What is your favourite dish to cook?

Freya: I love to make homemade gnocchi, and pair it with whatever I’m growing in the garden at the time. Its most exciting when the tomatoes ripen though. That’s the best thing with gnocchi.

Alan: In the Poem ‘You Want a Social Life, With Freinds’ Kenth Koch suggests that there are three things worth having in life: A career, friends and love. But only two are ever possible. Which two are you taking and why?

Freya: I’ll take friends and love any day. Career is just what we do to distract ourselves until we depart the mortal coil. I’d be quite happy to never work again if money was no object. And regardless of money I’d rather be poor, loved and drunk with friends than working and loveless or friendless.

Freya: If you were the lovechild of two well-known artists from any moment in time, who would you be the child of?

Freya: If your next record could be described as a meal what would the meal be?

Alan: A Happy Meal with the pickle removed from the cheeseburger washed down with a sweet Coke. It’s still a work in progress.

Freya: What was your favourite dress up as a kid?

Freya: Do you believe in Aliens? And if so what type of music do you think they would make?

Alan: I do believe in Aliens. I think I’ve even met a few. But I’ve never stopped to think about what kind of music they would make. My guess is it would be inaudible to the human ear.

Alan: Townes every time. Kris is a nice guy. I don’t have time for nice guys.