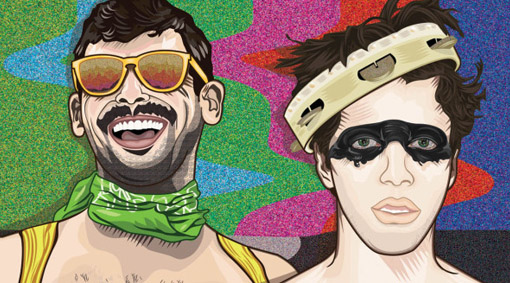 Jake Stone is as prolific as it gets in this here city of Sydney, and it’s miracle we haven’t lost him to Brooklyn (yet). With core projects like Bluejuice and side projects like Embankments, not to mention his writing, production and radio/TV work, he took a moment out of his time at Groovin the Moo to listen to Spookyland’s track The Silly Fucking Thing and ask what Marcus described as “finally some hearty questions”… Illustration by the amazing Nina Faelnar

Jake: There’s a real sense of menace to your work, a sort of Charles Manson vision of folk, and the lyrics seem to concentrate on that sadistic/masochistic side of relationships. Lines like ‘I’m a damn good sorcerer, and I’ll bless and curse you with my fingers, just to hear your screaming voice’ are certainly evocative. Does menace make things cut through more keenly in singing and writing?

Spookyland: There’s certainly a huge revenge thing happening in that song. I wouldn’t want menace to be my only kind of shtick, but when there’s conviction in any feeling and it writes itself I think it’s got to happen. I like to think that emotional conviction always cuts through, whether people hate what you do or not.

Jake: Do you see something of a young Nick Cave in your attitude to drama and writing?

Spookyland: I love his music, so it has to have had some effect. My greatest pleasure is pushing the dexterity of words, seeing how far they can go. It’s not always about pushing to the far reaches, Latin words and shit, sometimes peeling back to something silly or childish is an effective feat. Poe often wrote about feelings and states being beyond description, but he tried it anyway. I could assume (just assume) that Nick Cave and I might have that in common.

Jake: What are you trying to express? The inner workings of you in your relationships, or a broader sense of everything being fucked?

Spookyland: To me, it’s a realisation that no women are goddesses, as much we might be prone to think sometimes. The guy is telling her that he’s not fooled anymore. He even threatens her.

Jake: I’ve read that you used to work as a solo singer/songwriter, but The Silly Fucking Thing is the first move towards a band aesthetic. Why the shift?

Spookyland: The band has been an on and off live thing for a few years now, but the opportunity to properly record the band never manifested. I didn’t want to do a lo-fi thing with the band, so when the chance came along, to do it the right way, we jumped on it.

Jake: How did you settle on the sound of the recording?

Spookyland: I left that in up to Tony, the producer, he approached us. I knew straight away that he got it and I trusted him from day one. He wanted to take Spookyland from the lo-fi to something that sounded huge.

Jake: Are you primarily from a band background?

Spookyland: I started solo. Most of my songs are one man folk songs, but I’ve always been more band inclined, it serves my songs better. Playing on and off with a band over the years has been more to do with feasibility rather than a thought out artistic approach.

Jake: How did studio tech play a role in your aesthetic development, and how did the recording process differ with Tony Buchen?

Spookyland: Tony’s a virtuoso in his field and we used good gear and a good studio. His production adventures created some sounds that I’ve never heard before—gated drums in microphone booths/creating organic chorus by literally splitting guitar output between two oscillating amps facing each other.

Jake: What kind of artist do you want to be?

Spookyland: All I can hope for is that the people who stumble upon my work will think; ‘I believe him’, whether they like it or not.

Jake: When do you know you’ve got something to work with in a song?

Spookyland: Usually when the epiphany of a riff and a lyric meet at the same time. The emotions are always memories.

Jake: Why do you think the ‘old-school’ practices of production and writing appeal to you?

Spookyland: Limitation forces the burden of the result, onto energy. Good energy, strange energy, bored energy- it’s always interesting to me if it’s naked enough. Lou Reed and Metallica’s record is a great example of that.

Jake: Some of this material is quite old. What appealed to you about bringing Silly Fucking Thing back from your youth?

Spookyland: First off Tony and I sorted through a bunch of my songs, and if it had been left up to me it would have an all out Americana E.P—in terms of musical aesthetic, that’s where my head was caught. Tony was much more interested in the energy of what I do and really didn’t want Spookyland to be seen as just another hip revivalist band. Silly was his choice, he put his foot down with that one. I see now that it’s a good single in the sense that it bridges the gap musically between my folk influence and the dense emo lyrics, it also brings back the ambient thing which was a huge part of what I was doing when I was a teenager.

Jake: And finally, what makes you Happy?

Our super cool illustration is by the equally cool by Nina Faelnar. Nina is a 22 year old illustrator and graphic designer from Sydney, Australia. She enjoys illustrating crazy characters, with a cheeky punch to them (yeah, she did the ‘cheeky’ Alex Cameron). You can find her at www.illustrationsbynina.com Katie Rynne, agent and booker, on breaking and building a sustainable career in music LISTEN: Comp The Unknown - Bad Side