“Stuck in a daydream / under a moonbeam / head on my pillow at home,” chirps Stu Mackenzie in the opening seconds to the title track from King Gizzard and The Lizard Wizard’s latest exposition Paper Mache Dream Balloon.

As flutes flutter around like birds and guitars pluck their way gently through a bed of acoustic instrumentation, it seems like no other moment could encapsulate the surrounding body of work so succinctly. For anyone that is familiar with King Gizzard’s back catalogue, this vignette may paint a very different picture to what they expected from the band’s seventh album since 2012. But from the first whisperings of a new album being in the works, Paper Mache Dream Balloon was always going to be an acoustic offering. Masters of the modern concept album, King Gizzard set out to an empty shipping container on singer/guitarist Stu Mackenzie’s parent’s farm in rural Victoria to record an album with “No electric instruments. Just acoustic guitars, flute, double bass, fiddle, harmonica, drum kit, clarinet. What ever [they] could find really.”

Although for a band that has consistently put out blistering explorations of various psychedelic appendages – from the rollicking garage of 12 Bar Bruise to the proggy excellence of Quarters  – Paper Mache Dream Balloon isn’t all that surprising. There are elements throughout the record that the band have utilised to great effect in the past: that subtle sitar work we saw on Float Along – Fill Your Lungs is strewn across tracks like Cold Cadaver while Ambrose Kenney-Smith’s familiar harmonica blast weaves in and out of Mackenzie’s falsetto vocal, tying together any loose ends, reminding us that this is, in fact, a King Gizzard record.

In the end, the album sounds like a melting pot of pastoral psych-folk like Rubber Soul-era Beatles or the softer side of Led Zeppelin, 80s new-wave, and even 90s alternative rock bands like Beck or Violent Femmes. With the exclusion of electric instruments, the album relies heavily on innovation. The clarinet makes an appearance on Most Of What I Like, while Sense kicks the album off with lounge-y jazz drums and double bass. It’s probably the most upbeat record they have put out, something you have no doubt inferred from the album’s wonderful cover art. N.G.R.I (Bloodstain) sounds like it could be off The Stone’s Exile On Mainstreet, all honky tonk piano and belting harmonica.

There are darker moments too, with the spooky as hell Trapdoor slinking it’s way into the middle of the record. It’s sounds like the title music for some morbid children’s cartoon, one what would haunt your young, fragile mind. Mackenzie sounds like a crazed piper throughout the record, trilling away on his flute like a human embodiment of the Skull Kid from Majora’s Mask. There’s definitely a creepy element to the record, a sort of hypnotic dreaminess that laces each track, and in the end they sort of ending up sounding a lot baroque pop visionary Jacco Gardener.

Paper Mache Dream Balloon is by far King Gizzard’s most polarising record to date. Those who fell in love with the bratty garage brawl of the Willoughby’s Beach EP and 12 Bar Bruise will no doubt be lead astray by the folky backbone of the record. Admittedly there are moments that feel a little naff – but for some reason King Gizzard can pull it off. Those who have followed the band’s evolution will relish in the album’s buoyancy. Most of all Paper Mache Dream Balloon shows King Gizzard’s unparalleled prowess as musicians. It’s an album impregnated with ideas, coming from a band that should, by now, be well and truly dry. Actually come to think of it, that’s a line I used in my review of Quarters… 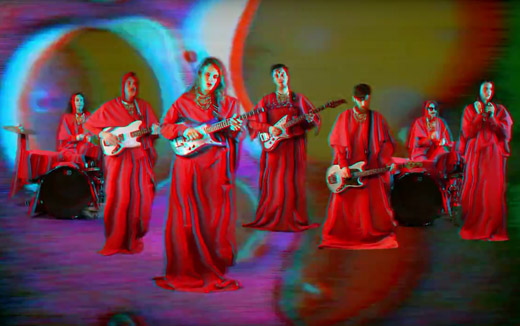