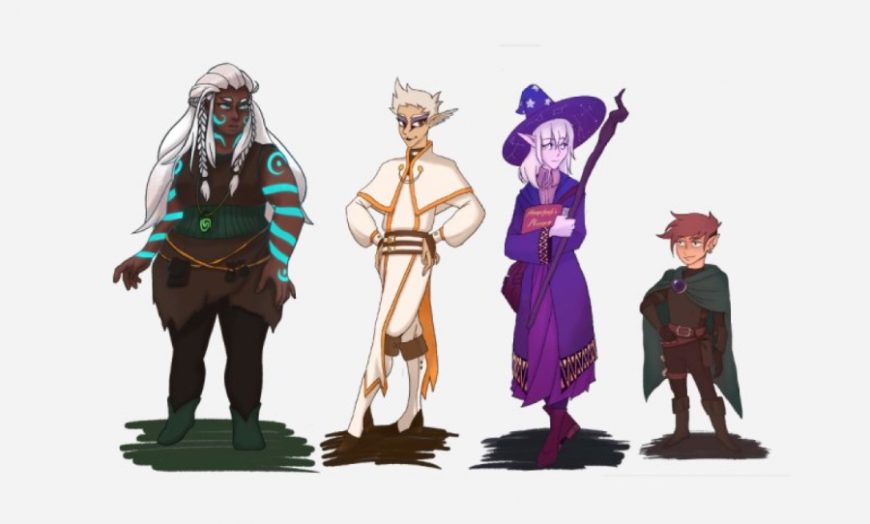 Sammy from Queer Dungeoneers, an Australian Dungeon World podcast, clues us in on the value of “being who you are by being someone different”.

Who doesn’t like a good, locally-run tabletop podcast? Queer Dungeoneers is an actual-play Dungeon World podcast, currently on their 87th episode, meaning they’ve just celebrated two years on the air this September.

We got to talking with Sammy, the game master, editor, and producer of Queer Dungeoneers, to talk about tabletop gaming in 2020. HAPPY: Queer Dungeoneers has been around for two years now, congrats! What made you decide to create the podcast in 2018?

SAMMY: Thank you! We couldn’t be prouder to reach this point. The show started on a whim after I’d been listening to another podcast, Friends At The Table, which also uses the Dungeon World roleplaying system. I wanted to start up a game with my friends, but for some reason I felt like I needed an excuse to start a new campaign – so why not make it a podcast? I would say that this is a terrible way to approach a creative project, but it clearly worked! We knew we needed a niche to stand out in the ocean of actual-play podcasts, and everyone involved was queer, so voila – Queer Dungeoneers.

HAPPY: Did you initially plan for the podcast to become such a long term piece?

SAMMY: Whenever you start a fantasy roleplaying campaign, there is an expectation that it will take a long time to see it through to the conclusion. However, most campaigns get dropped, and most podcasts get canned in the first few months, so in the broader cosmic sense, I don’t think anyone really thought we would stick with it. At first we joked that the only person listening was my mum, but that wasn’t true for long. We all just went along with the ride, and now we don’t seem to be able to get off!

HAPPY: How has the podcast impacted your lives?

SAMMY: As the editor who produces an episode each week, having a project that requires regular creative output has been a valuable exercise, albeit often daunting and exhausting. To think that I’ve pushed that ‘publish’ button over 85 times is amazing.

For the cast as a whole, it’s great to see that people enjoy our output. In many ways, Queer Dungeoneers is a jazzed-up version of something we were already doing as a group anyway: playing roleplaying games, making goofs, and getting far too tangled up in a world of our own creation. To share that with people, and get others ensnared too, is magical. I think it demonstrates to the whole cast that our ideas and self-expressions have value, even if they’re produced while we’re just messing around at the games table.

HAPPY: As being queer is such an integral part of the podcast, have you ever felt pressure to meet any specific expectations, or intimidated by representing a part of the community?

SAMMY: Our show is innately queer, because we are queer, and our queer experiences inform everything we create. One of our keystones as a cast is that we shouldn’t feel pressured to include any explicitly queer themes in the show. Diverse identities will naturally ooze into the content, because gender and sexual diversity is woven into the fabric of our group.

I think this approach resonates with many queer people. So many queer characters in media are reduced only to their queerness, and aren’t given the opportunity to exist as fleshed-out entities beyond this one part of their identity. Our more free-form approach to representation lets the characters just live their lives, and allows the cast to explore queer themes when they are comfortable and enthusiastic to do so.

HAPPY: Have you experienced any negative backlash relating to the podcast?

SAMMY: We’ve been lucky to have avoided any backlash thus far. Given enough time and exposure, I’m sure that the evil Eye of Sauron will gaze upon us eventually, and the internet hordes will find us. But today is not that day.

HAPPY: Do you feel like there’s a lack of young, queer, Australian voices online? In general, or in gaming or tabletop specifically.

SAMMY: The voices are always there, but they struggle to be heard over those we amplify more. Any victories come in small increments; first a gay cis man, then a cis woman, then a drag queen. It can be a long time before we start to see trans people appearing prominently in the cultural zeitgeist. Someone like Jordan Raskopoulous is realistically only able to succeed in the way she has because her career was established before she transitioned (and she freely admits this), although it is heartening to see her build a robust presence in the gaming sphere and use her platform to support her community.

We have come a long way, and have a long way to go. People of colour, and especially indigenous Australians, are even further underrepresented. It can sometimes seem that the world is inevitably becoming more progressive, but change only happens because individuals are pushing for it every day.

HAPPY: How did you folks come up with your characters? Were there any particular inspirations?

SAMMY: In terms of non-player characters, the media I consume before a session often has a subconscious impact on what crops up in the game. I watch She-ra, and then a paladin with a magical sword and shield and an unwavering sense of justice turns up. I guiltily rewatch Pirates of the Caribbean, and suddenly the party are out at sea with the Queer Buccaneers. What can I say? I’m incredibly fickle, which comes through in the frantic energy of the show. It keeps things fresh.

The player characters were created separately from each other at first, with fairly basic hooks; a druid who wants to save her village from a dam that’s blocking their river, a shy-but-passionate wizard with a buried past involving necromancy, a plucky halfling thief with a penchant for poisons, and a self-obsessed bard who started life as a swan. From there, the players have incorporated new elements into their characters based on how the campaign has played out. Queer Dungeoneers is built on long-form improvisation, which allows us to tailor our worldbuilding and character backstories to the themes that naturally emerge from gameplay. The result is an exciting story with a loveable set of characters that all feels far more planned out than it actually is.

HAPPY: What’s the story behind the phrase “being who you are by being someone different”?

SAMMY: It initially began as a joke! Ursula, who plays Nimay the druid, and I were spitballing taglines and she said it off-hand, but then we realised that it fit perfectly. Tabletop roleplaying presents the opportunity to experiment with identities and experiences outside of your own in a low-stakes environment. This is wonderful for the queer community, who may not know what their identity is yet! And so, “being who you are by being someone different”: walking in different shoes for a while and seeing what feels right.

HAPPY: Do you have a favourite episode, event, or plot line?

SAMMY: Some highlights are:

Episode 5, Emotions? In MY Giant Wurm?, where the party use the power of relationship counselling to stop an ancient monster from coming back to life and terrorising the world.

Episode 10, The Tomb Where It Happened, where the party are all split up and have to navigate an ever-changing haunted tomb to find each other again. The end of this episode defined the rest of the campaign.

Episode 28, Thin Red Line, where a party member gets help from a goddess to find who she is again after committing an atrocious act.

Episode 78, Snakes On An Airship II: Snakenado, where the party investigate who released a crate full of snakes on their plane to sabotage their voyage to the edge of the world. This is the second time this has happened.

The beginning of the end begins. The party arrive at their destination – now they need to get inside.https://t.co/JKnQFjwbqA