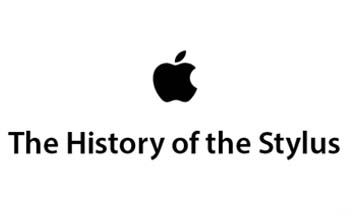 Writing and drawing are fundamental to human culture. It’s how history is transmitted, art is created and lifetimes are captured. When the first humans started carving shapes into cave walls with a rudimentary stylus, they inadvertently became the first writers of non-oral history.

Since those moments the practice has flourished; language has developed intricacies beyond categorisation and art has attained character far beyond the two-dimensional. The act of scribing is integral, and it isn’t going anywhere.

With the announcement of the Apple Pencil, we’ve realised just how far we’ve come since humans were etching messages with sharpened bone. Stylus: a point used to write. As we anticipate the latest evolution of this ancient device, look back on just how far the simple tool has come.

A very early example of a stylus comes from the Roman Empire, when philosophers, scientists, politicians and poets would catalogue their discoveries and discourses on wax tablets. Here too, the Roman alphabet was born.

Not too far a departure from the Roman style, the middle ages saw scribes employ metal or bone styli in their writings.

Concurrent to wax tablet etchings, the world began to find a natural stylus in the plucked feathers of large birds like hawks or eagles. Though far less durable than a metal implement, a quill gleaned some advantage in its ability to hold ink.

In the late 1700s, Nicolas-Jacques Conté discovered a method of mixing powdered graphite with clay which allowed for the invention of modern, wood-held pencils. Previously, primitive and poisonous chunks of carved lead were used.

Closely following the invention of metal-nibbed pens in the 1800s, Waterman introduced the fountain pen. The design was bold, durable and elegant, and thus has remained one of the more widely-used styli even today.

The ballpoint pen was patented by John J. Loud in an effort to create a stylus which would write on coarser wood, papers or other surfaces. Little did he know how important his invention would become.

Very soon after, companies like Bic would begin mass producing the product.

After being popularised by Magic Marker, the thin and elegant felt-tip as we know it was developed by Yukio Horie of the Tokyo Stationery Company in the ’60s. This stylus remains a favourite for artists and designers.

In the last 50 years, there has been a notable lack in development of the stylus. Perhaps it was hard to top the ballpoint, or humans became increasingly interested in keyboard rather than pen.

But creatives all over the world stuck to the stylus. Writers still compose their first drafts in a notebook, musicians look for a blank sheet of paper to jot down ideas, and illustrators scan their drawings before digitally perfecting them.

The Apple Pencil bridges the gap between the digital and the tactile, whipping the world’s interest back to the tool it held in its hand for thousands of years.

If you can’t say no to note-taking, sketching, etching, or just the feel of a stylus in your hand, the Apple Pencil is for you. Spatial Audio is coming to Logic Pro this year