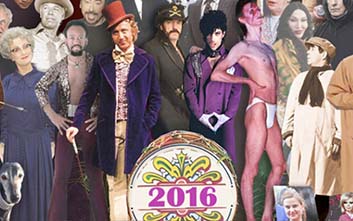 2016 is officially the worst year of all time. Since Davie Bowie‘s passing back in January it has been a downward spiral of death, with some of the most legendary figures in the arts losing their lives one by one. 2016 is officially the worst year of all time but this reimagining of the Sgt. Pepper’s cover featuring all the legends we lost this year is helping.

There was Prince, Alan Rickman, Gene Wilder, Sharon Jones. There was Leonard Cohen. Outside the arts there was Muhammed Ali; and in politics there was two significant travesties: Brexit and the triumph of Trump.

In a way, it’s more tragedy than one could realistically take. However, this illustration by Twitter user Christhebarker is making it somewhat more bearable.

It’s a reimagining of The Beatles’ classic cover for Sgt. Pepper’s Lonely Hearts Club Band only with all the original figures subbed out for the legends we lost in 2016.