Slightly Stoopid are dedicated weed smokers. Their tunes are atypical stoner music – a flash-fried fusion of dub, rock, roots, punk and funk – and their Instagram feed is a melange of posters for festivals like Sweet Water 420 Fest, weed memes and shots of personal stashes.

Now the band have taken their fondness for getting blazed to new heights with the pressing of a record made entirely of hash. US dub rockers Slightly Stoopid have created world’s first smokeable record out of $6,000 of hash – “a piece of art” they say.

So far the band have made two records out of super-resinous bubble hash – very, very pure hashish made from only pure cannabinoids from the cannabis plant.

The first effort was said to be passable in terms of listenability, “but the office potheads couldn’t help chipping away at it for their own enjoyment,” the band’s manager Jon Phillips told Billboard. It was made from $6,000 worth of bubble hash, and cost $1,000 to press and master.

“It’s all about putting two old-school vintage mediums together,” said Phillips. “Vinyl is an old-school medium, and that’s how we feel about hashish, too.”

A second attempt of pressing the track – an instrumental titled Dabbington– yielded unlistenable results. A third attempt is being planned.

The final record will either be auctioned off for charity or kept. It will not be sold. “It’s not something you’re going to plop on your turntable over and over again,” Phillips said. “For now, this is an art piece.”

Slightly Stoopid are on their way here for the 2017 Byron Bay Bluesfest. 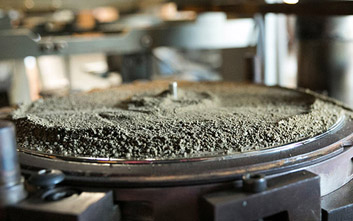 Remember the smokeable record made from hash? We asked Slightly Stoopid for an update