The Story of Verve Records: Documenting the Golden Age of Jazz
Skip to content
[gtranslate]

Verve Records is the beating heart of jazz. One of the most prolific labels of all time, Verve was a key player in the widespread popularity of the genre in the early 20th century and boasted an impressive roster of all-time greats. Having previously pioneered Clef Records and Norgran Records, labels that possessed Charlie Parker and Billie Holiday, Granz merged the companies into a new amalgamation, the apotheosis of contemporary jazz.

This is a comprehensive guide to, and history of, the iconic Verve Records. Find out how one label changed the face of American music forever. Granz had become a jazz fan after hearing the Coleman Hawkins recording of Body and Soul, but his grander vision was to employ jazz as a means of breaking down segregation. He was overtly open in his triumvirate objectives; make money, combat racial prejudice, and present good music.

It was commonplace for jazz clubs at the time to play to segregated audiences, but when Granz, a 6ft tall ex-marine who kept in excellent shape as a tennis player, began promoting his own concerts, he demanded integrated audiences and good rates of pay for the musicians.

In 1944 he took the ambitious approach of arranging a promotion at the Los Angeles Philharmonic. Borrowing money to record the show, an unorthodox concept designed to present the ephemeral spontaneity of a ‘jam’ for mass audiences, Granz followed through. It was a concept that would later revolutionise the improvisational landscape of jazz.

The event was a sellout and the concept of Jazz at the Philharmonic (JATP) was born. Monthly concerts followed, which were all recorded, gathering groundswell before the show set out on the road for a national tour.

By 1946, the now annual JATP tour boasted some of the biggest names in jazz such as Charlie Parker, Coleman Hawkins, Buddy Rich, Lester Young, and Billie Holiday. The concept that began as a small-scale club show had become a national luminary.

At this time both Parker and Holiday were heroin addicts – Holiday was also an alcoholic – but when asked if he encountered behavioural issues Granz replied curtly, “No, they were fine, always very polite, but you don’t understand, I worked for years with Buddy Rich.”

It was a curveball response. The virtuosic drummer was no addict, but he did have a mercurial mood and irate temper. 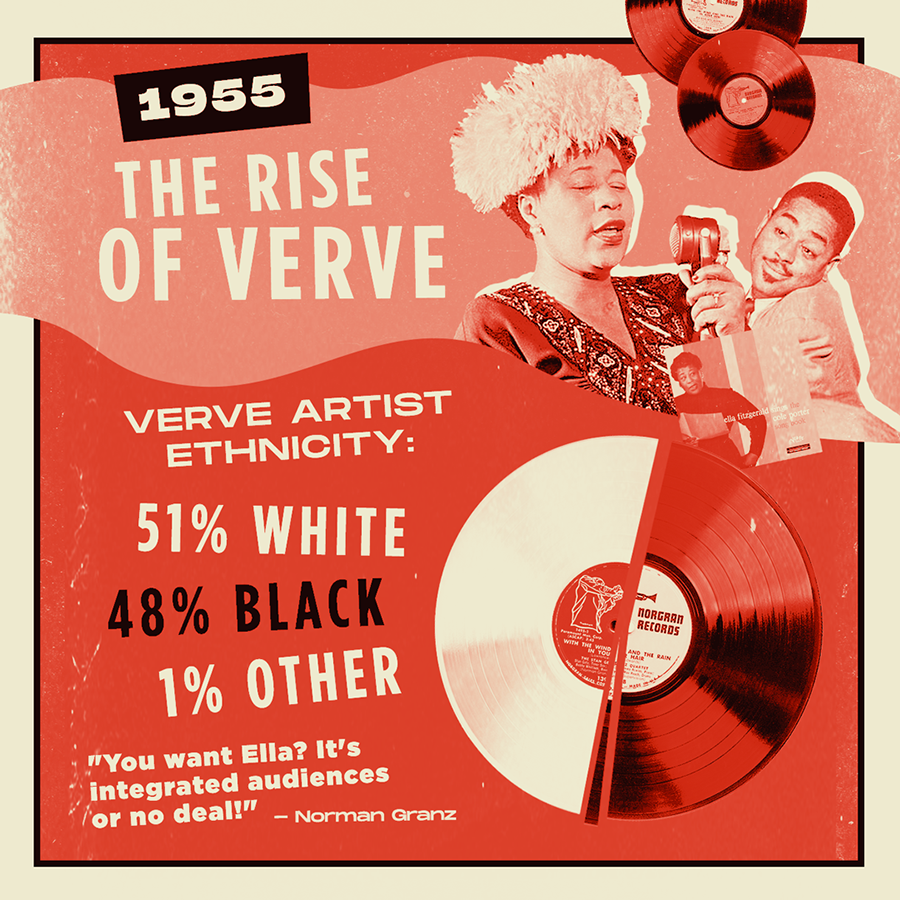 The birth of Verve

It was in the tail end of 1955 that Norman Granz formed Verve Records. He did so for one purpose; to service the immense talent of Ella Fitzgerald. Already managing her after Moe Gale, Granz had a crystalline vision for the kind of records he thought she should be making. As history has it, he was right.

The conglomerate of Clef and Norgran records was off to a flying start with Ella Fitzgerald Sings the Cole Porter Songbook. It became one of the highest selling albums of 1956, elevating the status of Verve to a staple for the confluence of jazz and popular music.

Under Granz’s stewardship, Fitzgerald became one of the greatest singers of the 20th Century. Then the most powerful voice in jazz, Granz utilised Ella as leverage to break down segregation and snuff racism surrounding the genre at some of the elite venues in the States – “You want Ella? It’s integrated audiences or no deal!” In his mission to popularise jazz, Norman Granz was fighting a war on two fronts. On the entrepreneurial front, Granz was trying to elevate jazz from the smokey, often seedy, clubs into larger, more prestigious event venues. On the social front, he was pushing for artist rights and, more seriously, an end to racial segregation, a fight that cost him both professionally and personally. A self-made man, Granz was a figure in the ’50s towards whom none were neutral.

Many artists revered him; “With Norman, you travelled first class, stayed at first-class hotels, and never played anywhere there was segregated seating,” said trumpeter Dizzy Gillespie. Other figures, often white, loathed him. Singer Mel Tormé, who recorded for Verve several times and made more than one classic under his auspices, Mel Tormé Swings Shubert Alley, called Granz an “ignoramus”.

Yet, despite the fervent controversy, jazz was beginning to shed its ignoble virtues and declassed status. What Granz soon ascertained was reciprocity between box office and record sales that few thought feasible. The albums leveraged the concerts and the concerts created more live albums, and so forth. Within a few years JATP was an American phenomenon, woven into the tapestry of jazz history.

Contrary to apocryphal industry stories, Granz never ripped off his musicians, black or white. Drummer Gene Krupa told Down Beat that over a two-week tour with Granz he earned more than paying two months in a jazz club. Oscar Peterson echoed this saying, “I think the predominant factor in his image is his honesty.” Initially, starting Verve Records was a way for Granz to expand his JATP franchise. Soon enough, artists who were appearing in both the crowd and onstage recognised the opportunity for making studio records with Granz. By the bookend of the 1940s, Granz had already signed some big names to his fledgling Clef and Nogran labels including Charlie Parker, Billie Holiday, Dizzy Gillespie, Lester Young, Count Basie, and Stan Getz.

On Christmas ever of 1955, the announcement came that Granz was forming a new conglomerate label. Granz was quick to submerge Clef and Norgran Records under the umbrella of his new parent company. This genius merge gave his embryonic label a roster of notable names and records. This relatively small but potent host now represent what is widely referred to as the golden era of jazz.

So much so that both George Avakian, Columbia’s head of jazz, and his opposite number at RCA Victor, were finding it tough to keep up. Only Blue Note Records, who earlier that year had released Miles Davis’ first 12″ LP, had the independence of mind to operate outside of major labels and garner a roster to rival Verve’s own.

Granz did not rest on his laurels, quickly getting to work by signing new artists with a wider scope in musical proclivity. This, in turn, swung many new fans around to jazz as the blossoming genre began to supersede the backstreets of America’s greatest cities.

Some of the most triumphant recordings from this early period include Ella Fitzgerald’s Great American Songbook, beginning The Cole Porter Songbook in 1956. The crowning jewel, however, was the clairvoyance to permit a duet album with Ella Fitzgerald and Louis Armstrong. While not an obvious choice of duet partners, the result was brilliant and came to be known as the one of the most important jazz singing albums in history. Satchmo’s recording with Oscar Peterson – who played piano on aforementioned albums – is another case of plucking two musical giants, pairing them together, and creating magic in the studio.

Peterson, a Canadian pianist, was the second most prolific artist on Verve Records with a total of 47 albums. He was followed by Stan Getz at 43 and Ella Fitzgerald at 42. His work as a fearsome leader of a trio or quartet truly shines with albums like the Great American Songbook, The Jazz Soul of Oscar Peterson, or Oscar Peterson At The Concertgebouw.

In its early years, Clef boasted two of the best jazz pianists alongside Peterson; Art Tatum and Bud Powell. This trio reigned supreme over the keys until 1962, when another expert of the black and whites made his debut record for Verve; Bill Evans with Empathy. This was the pianist that would go on to record Kind Of Blue with Miles Davis in ’59, the most widely revered jazz record in history often described as being“made in heaven”. Evans recorded a total of 16 albums with Verve, expressing the vast diversity of his timbre on albums like Conversations With Myself and the majestic Bill Evans With Symphony Orchestra.

This was the golden age of hard bop, bebop, and indeed jazz in general with some of the most musically and culturally important works of all time being released, many via Verve. As the ’60s dawned and rock and roll generated favour, Verve had to pivot in order to reach a new audience and stay ahead of the curve. In 1960, Granz sold Verve records to MGM Records and figurehead Creed Taylor was soon running the show. Having lost the lifeblood of Verve, Taylor looked to new horizons, specifically that of South America. In an attempt to bolster their audience Taylor branched out to include more world music influences such as samba and Bossanova. As hindsight reveals, it paid off.

Sailing the seas from South America were artists like Stan Getz and Charlie Byrd. Among them was Joao Gilberto, whose collaboration with Getz won the Grammy award for Album Of The Year in 1965. Jazz had witnessed a new burst and was more popular than ever.

Verve was not far behind and inked new deals with artists like Jimmy Smith and Wes Montgomery. Smith had already seen success with Blue Note and Verve helped him to reach the apex of his career. Montgomery’s debut The Incredible Jazz Guitar of Wes Montgomery became an instant classic, along with Smokin’ At The Half Note, ushering in a new wave of jazz guitarists.

Jimmy Smith conjured incredible tones with the Hammon B-3 organ, the same instrument that would heavily influence Herbie Hancock. Albums like The Cat flaunts the complex orchestral arrangements of Lalo Schiffrin with the hammering organ, though at no time was it eclipsed by the symphony.

Smith also recorded some fine work with Montgomery such as The Dynamic Duo and Further Adventures of Jimmy and Wes, featuring mind-bending contrapuntal harmonies and telepathic lead work from the keyboardist and guitarist.

Before samba had even entered the charts, Taylor had the prescience to intercept its popularity. Stan Getz went on to become Verve’s most recorded artist of all time.

By the time the ’70s rolled around, jazz had more or less fallen out of favour with the general public. During the early ’70s Verve became a part of PolyGram, incorporating the Mercury/EmArcy jazz catalogue.

Aside from jazz, Verve released a plethora of iconic albums such as The Velvet Underground’s legendary first three albums, along with Frank Zappa’s Lumpy Gravy.

In 1990, influential post-rock outfit Talk Talk signed with Verve after complications with EMI regarding a lack of commercial appeal after their hit-laden fourth album Spirit Of Eden. The band had come to embrace extremely experimental methods of recording, such as employing no lighting in Wessex Sound Studios aside from strobe lights and lasers.

Their fifth and final album, Laughing Stock, was released via Verve in ’91 and is widely considered a masterpiece as well as a progenitor to the post-rock movement.

Through they had branched out indefinitely, Verve still stuck to its roots, signing contemporary jazz greats such as Herbie Hancock, Wayne Shorter, Joe Henderson, John Scofield, and Betty Carter.

In 1998, Universal and Polygram merged and Verve’s holdings were incorporated into Universal’s GRP Recording Company to become Verve Music Group.

Today, the Verve imprint continues to manage an extensive jazz catalogue, though their tastes have expanded. Founded in 1956, Verve has directed and documented a massively influential period in music history. With Norman Granz fearlessly at the prow, jazz endured a golden age that proved massively influential in the concourse of time.

While Verve Records is responsible for issuing almost 800 albums, it all began with three incredible forces in jazz. The saxophone of Charlie Parker, the voice of Ella Fitzgerald, and the entrepreneurial impresario Norman Granz.