The Backrooms: An eerie phenomenon lies behind these familiar hallways
Skip to content
[gtranslate]
MP True horror exists with one foot in reality and the other dangling off a cliff. Enter the backrooms, a maze to go mad in.

Have you ever dreamed of endless hallways? Gotten lost on a school excursion? Found a place where you’re alone yet still being watched? Chances are, you’ve stumbled into the backrooms – a terrifying and oddly nostalgic realm for you to live out the rest of your days.

We’ve covered conspiracies before, from Erratas to Area 51, but nothing quite reaches the uncanny valley like the backrooms. So we dared to roam the spine-chilling backrooms theory and this is what we found. 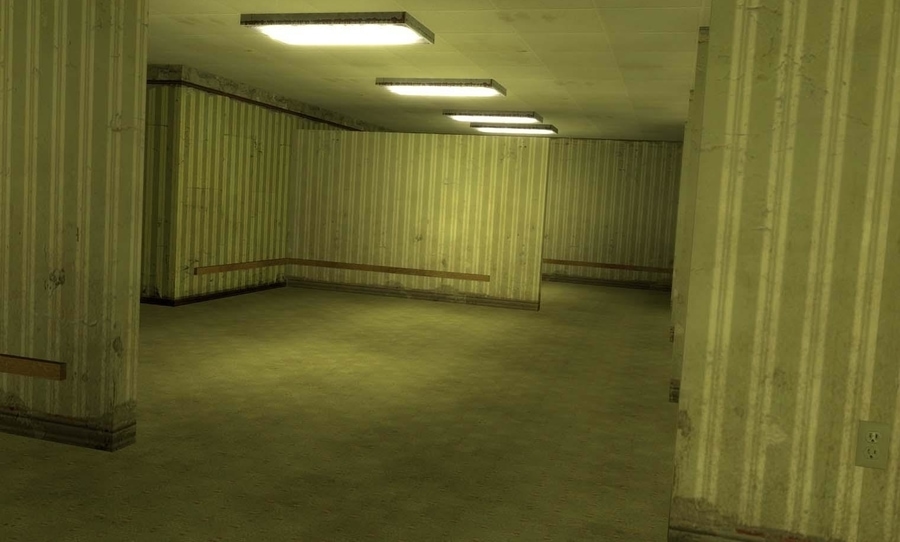 So what are the backrooms?

The phenomena known as the back rooms have mysterious origins. What is the backrooms? Well, they were first mentioned in May 2019 on a 4Chan thread for “cursed images”. An anonymous user posted an image of a tilted, yellow hallway with an intensely disquieting nature. This backrooms hallway was nothing like the Minecraft hallways you may have seen before. Another user took creative liberty, commenting under the picture: 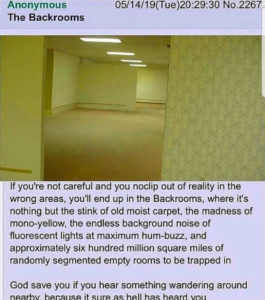 This haunted room, paired with the inspired description, caught the intrigue of thousands. Users began to discuss the backrooms theory, and how the room felt familiar to them. Is the backrooms a real place? Is there a backrooms hotel out there that resembles a minecraft hallway of some sort? Well, many claimed to have entered the backrooms via dreaming, evoking a fearful nostalgia.

Others explained their real-life encounters with the backrooms. Some found them by getting off the wrong level of an elevator.

How did they find the backrooms? Well, it all has to do with the term *noclip*.

No Clipping has its roots in the video game community, referring to a user command in Doom II. By typing ‘idclip’, a player could escape the physical restrictions coded in, enabling the player to walk through walls, objects, and other permanent objects.

Of course, you’d still be playing the video game, but outside of the intended area, leading to unintended and dark discoveries.

Today, noclip has a broader context. It refers to glitches (real-life or digital) in which the walls of reality are torn down, even if only for a split second.

Real-world examples include within minecraft hallways finding a backrooms creature or doppelganger, hovering planes, shadowless images, and other creepy mishaps that make you question reality. So, to enter the backrooms scary realm, you need to noclip.

Not a pleasant place to be, hey? Still, we’re only getting started. Apart from being trapped outside of space and time, you’re also not as alone as you’d think… backroom creatures for one.

it’s like “the backrooms”. rooms that have an eerie sense. most will have either yellow or bright florescent lighting. they’re also totally abandoned spaces. like these: pic.twitter.com/9W4XM6P97T

Some conspiracists claim that the backrooms have a level progression, once again tying the backrooms creepypasta into video game mechanics.

If you haven’t already gone mad or given up hope, there’s a chance you’ll find backrooms creatures of human-like resemblance, referred to as “hounds”. They are disfigured, manic and should be avoided at all costs. If you hear a rumbling noise, a hound is nearby. Walk away slowly and quietly, avoiding eye contact with the backrooms monster at all costs.

Aside from encountering the backrooms creature, you may also spot a strangely dark patch on a wall. This is what’s referred to as a ‘noclip zone’ By running through it, you could
a) end up back on Earth, in any location
b) be transported back to the start of level zero
c) be taken to a new dimension, teeming with hostile creatures, left to perish.

One terrifying theory suggests that these creatures are fellow victims of the backrooms, just like you, withered away, and totally insane. *Shivers*

Level 1: Say you choose not to enter a dark patch, instead opting to walk through the backrooms for days, you’ll reach level one.

Here, in the backrooms level 1, the carpet and walls are replaced with concrete, the lights flicker, occasionally switching off, and mechanical sounds echo around.

The hounds are greater in numbers, making a contorted screaming sound when the lights go off. Once again, avoid eye contact, and move to another room to avoid imminent demise.

Level 2: Here, the hallways will become narrow and claustrophobic. The lights will shine bright and hum intensely, skyrocketing the temperature up to 100 degrees in the backrooms level 2 halls.

Few have made it to level 2, and fewer have escaped. According to the survivors, the only chance of escape is total calmness and acceptance of the backrooms. Only when the backrooms have become your home can you depart.

Okay but. I work at a hotel and I swear I slipped dimensions in to the backrooms for a scary second. pic.twitter.com/W3AzZzqm9m

This psychological nightmare-fuel has had its fair share of influences and spin-offs. If we look back to the original 4chan image, the jarring, colourful hallways of Kubrick’s The Shining come to mind. So do escape rooms, the legend of Herobrine in Minecraft, and other unsettling appearances that just feel… off.

So, with all of that in mind, are backrooms real? More importantly, have any of you ended up there and live to tell the tale? Let us know is the backrooms real place.

Let’s not forget ‘the tethered in 2019’s Us – mirrored versions of people in our reality who existed in a seemingly parallel world – but with a distorted, and sinister twist.

Unsurprisingly, the backrooms have spawned several video game simulations where you can take on the wasteland yourself—a word of caution. Tread lightly, and don’t forget where you came from.

Up next: The 10 best horror games of all time