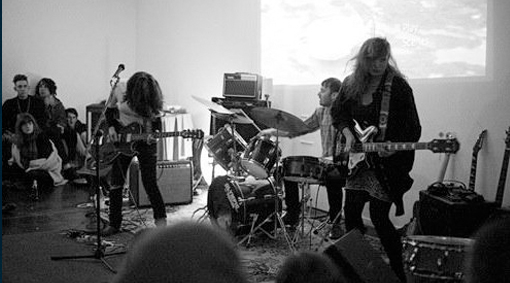 Today, I was struck by the least unexpected of news. Two chicks and a dude who all work at the coolest bar in New Zealand’s coolest city released a cool sounding song. The band are called Bad Sav and their single is called Buy Something New. It’s a dark, fuzzy little number reminiscent of Warpaint‘s swirling, choral singles and a distorted bass that sounds so nineties, you can almost feel the flannel against your skin. Oh wait, I am totally wearing a flannel shirt right now. #sonineties #fashionista All three band members/mixmasters/babes/all round ledges lend their vocal talents to this exploration of loud-soft, which is probably where the track gets it’s Warpainty sound from. Oh, that and the copious amounts of delay on that solid guitar jangle. There’s a lot of ride smashing in the choruses for this one – you really get the feeling that this is a band who don’t hold much back when they get on stage. What surprises me is that this is a heavy, loud psych band that still manages to sound like they’re from Dunedin. It’s all in the way that guitar riff is structured, less like a riff and more like an explorative, expansionist solo. Subtle, forgettable, utterly sexy.

I mean there’s not much to say other than that this single is really cool and we look forward to what else these guys might put out in the future. So lets turn to what other, far more professional critics have been saying about Bad Sav:

“PLAY MORE THAN ONE NOTE!” – Anonymous

“FOR THE SAKE OF MY SANITY, YOU HAVE TO STOP” – A girl on the edge who really wanted them to stop

Thanks to Under The Radar NZ for those inspiring words.