Noah Kittinger is the 18-year-old kid from Tennessee behind the low-fi, dreamy moniker Bedroom. When I was 18, my dream bedroom involved a mini basketball hoop, a bar fridge and high speed internet. Obviously with plenty of room for activities, Noah’s Bedroom is about to produce its second ambient LP, Grow. Bedroom is the solo work of our favourite teenager, Noah Kittinger. He’s now released his LP Grow, which is jam packed full of melancholy, electronic folk.

We introduced you to the Nashville noob last month when he dropped the first taste of the album; the folksy, transcendent We All Need Something. Having put out a few releases since setting up the project in early high school, it was also the first taste of Noah’s unrefined vocals, dropping the reverb that previously obscured his self-conscious voice. The change proved symbolic of increased confidence in all aspects of his art, with enhanced production and raw honest emotion encompassing the entire EP.

Grow opens with the faint sounds of a lawnmower or chainsaw on Being Hunted, ominous yet exactly what you might hear from your bedroom on a lazy weekend. Plucky guitar then fills the room, developing into soaring electric to complete the eerie instrumental.

The title track follows and quickly asserts the prevalent themes of the album, stuff most of us can’t even acknowledge at 16. Cries of “I’m sorry I can’t change” punch through melancholic guitars and synthetic horn notes. Nothing Lasts shows off a Metronomy-esque depth of sound, with catchy guitar lines and droney synth picking up the pace. Move Forward then enters with a folksy feel that is common on the album, only with crisp percussion that demonstrates the step up in production from the home-made sound.

We All Need Something proves to be the most upbeat and hand-clappy of the collection, although the lyrics still manage to perpetuate the melancholic vibe. It is the first of two Facebook-made features from Jade Lawhon, who provides an atmospheric dichotomy on backing vocals. Hurry, Get Up is a similar story in that all upbeat-ness is clawed back down to earth, although the words “You made my heart so sore” have never been so foot-tappable.

Jade returns on Drift Away, the co-vocals and echoey guitar reminiscent of The XX, and sitar-inspired sounds create dreamy goodness beneath the sentiment of the lyrics. Hide perfects the balance of brooding bass and soaring synth, before the Eastern sounds return on End, the strumming marching Grow to completion.

The music coming from Bedroom has evolved over time, but the songwriting continues to impress, particularly given his youth and the room to learn and improve. We can’t wait to see what Noah can do when he escapes Nashville, where dreampop is not quite prevalent. Released under independant label Furious Hooves, you can pick up Grow through all the usual online outlets, including Bandcamp. Like his first EP you can also grab it on tape, because they and Noah “just love tape. Tape is dope.” Lose yourself in the lush, vibrant sounds of Nxisee's Beetroot Tape EP 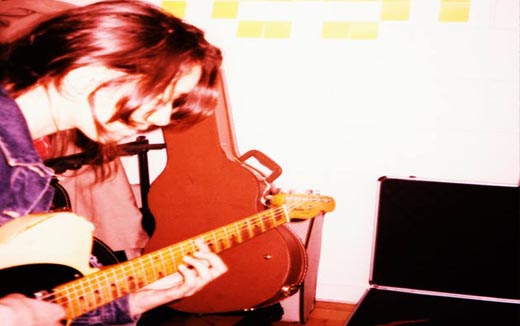