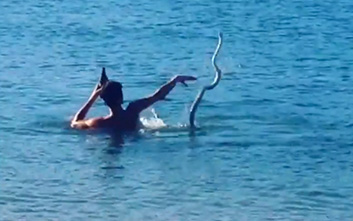 Australia has garnered a reputation as a country full of larger than life people, not to mention the local flora and fauna can kill you in an instant. When it comes to loose units, there are plenty to choose from. There are those blokes who motorised picnic tables and took them for a spin around Perth. Or that guy who didn’t give two fucks and took a cruise through Sydney’s Cross City Tunnel on a scooter. But they don’t hold a handle to the guy who took his pet snake for a swim while sinking a beer. You read that right. Up at Tallebudgera Creek (of course this happened in Queensland) people bore witness to a bloke believed to be in his 40 approach the water with a snake draped around his neck. The man proceeded to wrestle with the snake in the water, all the while enjoying a frosty bevvy. Brissie muso  Indy Davies was there and posted the footage to his Instagram account.

Don’t worry though, the man was abusing the snake. Remember when you would play wrestle with your siblings in the pool? That’s pretty much what went down.

There’s currently a bloke down here drinking a VB tally and chucking his pet snake around. Amazing

Speaking to the Gold Coast Bulletin Davies said the man in question was enjoying what appeared to be a casual play with his snake. “This dude came out of nowhere with a tallie of VB and a snake around his neck” Davies said. “Then he just threw it into the water and it swam back to him and then they just seemed to be playing. He had a good swim around — it was pretty rock ‘n’ roll“.

“The kids down at the park loved it but the parents hanging around weren’t so happy, some of the mums were freaking out that he threw it into the water“. Straya, where we catch tiger snakes in mouse traps 10 Songs Every Bloody Strayan' Needs On Their Straya Playlist