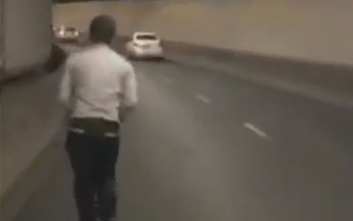 You can file this one under the ‘Meanwhile, in Straya’ folder. A man was seen last evening riding a freakin’ Razor scooter through Sydney’s Cross City Tunnel. No really, this actually happened. The man was spotted by Transurban, who run the tunnel, on CCTV footage who announced over the PA for the man to pull over and wait for the authorities who had been called. However, this bloke just kept pushing his way through and was long gone before the coppers arrived on the scene. Which in itself is insane since he WAS ON A PUSH SCOOTER. How could he escape them and then just disappear?

A passenger in a vehicle managed to capture the man on video, because if there’s anything we as a people can universally believe in is that if you see some crazy shit, film it on your phone rather than use that same device to call for the appropriate help or authorities.

Of course this isn’t the first time we’ve seen an Aussie causing an uproar with their choice of vehicle, after a group of ingenious Perth lads took their motorised picnic tables out for a spin in the city last year. More than 35 years after his passing, has there been a champion for peace and love as great as Bob Marley?