While they were last in Australia, we caught up with Brooklyn outfit Charly Bliss for a chat.

Brooklyn outfit Charly Bliss have come a long way since they released Guppy in 2017. Two years may not seem like too long, but in that amount of time, the group have taken their grunge-pop sound and morphed it into something with far more depth and sheen.

While they were last in Australia, we caught up with the band to chat all about their most recent full-length album Young Enough, superheroes, and world domination. HAPPY: Welcome to Australia, how are you finding it?

EVA: We fucking love it. We are having so much fun.

SPENCER: We were told about ‘drop bears’ but it turns out they’re not real.

EVA: Thank god though, right? I’m the perfect audience for those myths.

HAPPY: I read that you cite Lorde’s Melodrama and Superorganism’s self-titled debut as open inspirations for your latest album Young Enough. What exactly inspired you about these albums?

Also, that record, sonically, has its own world. It’s very cohesive and diverse with a lot of different emotional notes and that was something I hope to accomplish with Young Enough.

Superorganism is just so fun. It looks like they are having a lot of fun playing those songs and while it is pop, it’s very unique and doesn’t sound like anyone else but it still functions in the way that a pop record should function, still super catchy. But the creativity that they utilised with not being afraid to do anything that might seem initially goofy or silly.

HAPPY: What defined your transition from the grungy sounds of Guppy to the unabashed pop of Young Enough? Was there some defining breakthrough moment?

EVA: I think Guppy is still a pop record. Catchy melodies are definitely a foundation for what we look for in our own music and if we feel like it’s a song that would be forgettable of the melody is blah, it’s not something that we would be very excited about. But to us, it felt like a very natural transition, and pop music is the music that we love. We respect Taylor Swift just as much as we respect Superorganism and that’s the music that we are most inspired by.

HAPPY: So it wasn’t a conscious decision?

SAM: Yeah, when we started the band we were just like, “ok we’re going to play guitar, bass, and drums,” that’s what you do. So I think then being able to tour with different acts that have a little more creative set ups, like Bleachers or Wolf Parade. So it definitely wasn’t a conscious thing but we didn’t want to write the same album twice in a row.

SPENCER: In the first record we definitely burned through what the most obvious iteration of our sound was and the exciting thing about doing that is once you do it, you can see what’s on the other side. I feel like, at that point, the less obvious decisions are always the most exciting ones and that dictated a lot of the choices on this record.

DAN: Also, in this record we had something like 30 songs in the docket, so from that, we came out the other side deciding which ones were the best for a new record and the next level.

SAM: There were at least 10 songs, maybe more, that could have easily been the follow-up record to Guppy.

EVA: And probably what people are expecting us to do.

SAM: But that’s not what we wanna do as artists. We want to evolve and reach new people. HAPPY: Sam and Eva, you’re siblings. When you were playing music as kids, did you ever imagine you would start a band together?

EVA: We weren’t even playing music together that much as kids. If I told my ten year old self that this would be my life now, I would die from excitement. Plus, he’s my older brother so he will always be the coolest person in the world to me. It’s an honour to play with him. But yeah, our parents were artists and musicians so they always wanted us to play music together. But really I think it’s one of the most wonderful things about our band, alongside the fact that at this point Spencer and Dan are also siblings to us. We have been best friends since we were 10 or 11 and they spend Christmas with us every year.

HAPPY: Do you feel like you have some sibling superpower when you’re writing music? A bit of telekinesis on stage?

SAM: I think so, and it even extends to the band. Our skill sets are so opposite and complimentary

SAM: I feel like Eva is very lyric oriented and I am the polar opposite and more about the sonic quality, which is great because I don’t think anyone cares about what I have to say.

SPENCER: (Laughs) Yeah it’ll be a concept album about FIFA.

SAM: Or Fortnite. But no it works out and on this album, I think we definitely challenged ourselves to write outside of our comfort zone. But just on a social level, the telekinesis in our band is insane. We will turn to each other and say the same thing at the same time.

EVA: It’s creepy. We’re way too locked in but it means when we go on tour with other bands we’re impenetrable. But also I think all of us bring something to the band that is totally invaluable and we really couldn’t do it without the four of us together. I know so many people who are in bands that say “I can’t spend one more day with my bandmate, if I do I’m gonna murder them.” So I feel grateful everyday that I don’t feel that way. We have lived all over the world and in gas stations so we’re pretty tight. HAPPY: Tell me a bit about the concept behind Chatroom. Some of the lyrics are quite explicit, while others are vague and it weaves a really interesting story. What’s the concept there?

EVA: Someone sexually assaulted me that I dated and I think it just took me a really long time to figure out that’s what had happened. Someone else came forward about having the same experience with the same person and I retroactively figured out that I had experienced that too. You know, I’m a very open person, I think it’s super helpful to talk to people about your thoughts and feelings. For whatever reason, I felt a lot of shame about that experience and I really kept it inside and because of that it messed with me a lot more. I think it’s so important to let people in and ask for help when you need it but I just could not. But also, because of that it started seeping out in really interesting ways and I never in my wildest dreams thought that we were going make a record that discussed that experience so explicitly, but at the same time now looking back it was something I did need to talk about and work through and putting this record out definitely helped me do that. But also while Chatroom feels like a song that should be some depressing ballad, but instead it’s a celebration of strength and perseverance and resilience and it makes me really happy to play.

SAM: It’s been pretty core on the last tour and we play it last, so it’s been so great to see everyone dancing together which is a really cool feeling.

EVA: It’s really powerful yeah, that part of the set makes me cry more than the sad songs. Man, it’s incredible to think that this band has allowed me that experience of having something that felt like I couldn’t even talk about to now talking about it every day, all over the world with complete strangers. 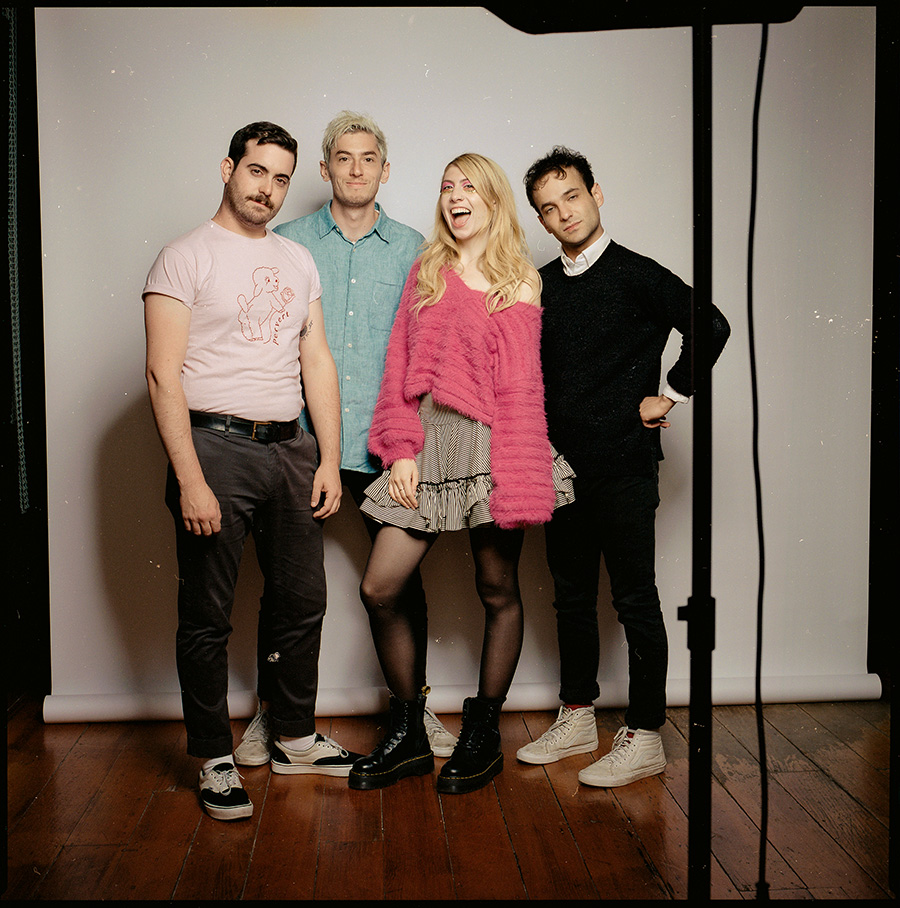 HAPPY: How has your perspective on traumatic past experiences changed since Guppy? Because Young Enough feels very uplifting and invincible although it touches on similar themes…

EVA: Yeah, I think the whole message of Young Enough in my mind is basically, getting older is about going through shit that you never thought you could make it out the other end of. Either those experiences can make you cynical or they can make you very empathetic and help you to grow into someone you’re proud to be. Albums are kind of a marker of where you are every couple of years.

EVA: Yeah it totally is and I’m very proud of the person on Young Enough. And I’m proud of all the people in the band and I can’t wait to see where we’ll be in a couple of years.

HAPPY: As the sound has cleaned up a bit have you taken on any different looks or moves on stage?

SAM: Spencer has this one where he lifts his leg up really high… no, I’m just kidding.

SPENCER: Yeah I do backflips on stage.

EVA: Yeah well it’s important to us. We wanted to feel like the live show is more cohesive and to us, this record felt so elevated so we wanted to follow suit and elevate the live show. So I’ve been wearing these insane outfits that are super fun and my friend Kesley Randall designs all my clothes.

HAPPY: Well speaking of superhero’s, Spencer I’ve read you did the amazing voice of Dash in everyone’s favourite film, The Incredibles.

EVA: Wow, I have to congratulate you on that transition.

SPENCER: Yeah man, I don’t know who the guy’s name is who did the second film but I hate him (laughs). No but I hit puberty so I couldn’t do The Incredibles 2. Some would say there was a little something missing from the second film but who am I to say?

SAM: Yeah literally one person… you!

SPENCER: No I’m just kidding, Huck you did a great job. EVA: Yeah we keep joking that we’re coming for this 12-year-old kid.

SAM: If Huck goes on to start a band I swear to god.

SPENCER: We will take him on tour.

HAPPY: So what’s next for Charly Bliss?

EVA: Taking over the world first and foremost. We are starting to work on our third record now and we are having so much fun, lots of dreams coming true. Salarymen: “We can be totally honest with each other"