It’s a fair indicator of a product’s influence when it becomes synonymous with a general sound. The Ibanez Tube Screamer has this kind of relationship with overdrive. If you’ve been in the studio, or have come into contact with guitarist types, they might have talked about a “Tube Screamer” tone. The pedal is so famous that it owns an entire effect.

So what makes this little green box so glorious? Let’s explore the pedal that was born from intense competition and continued to restlessly evolve, all the while remaining true to its roots. The Ibanez Tube Screamer is the little green overdrive machine that just won’t quit. It made its name in the midst of hot competition, enticing generations of guitarists along the way.

A Long Build Up

Rockers have been distorting guitar sounds in a variety of ways since the early ’50s. Yet, the concept of distortion in these times must have been a huge conceptual hurdle to traverse. The fact that the early pioneers of this tone were pushing equipment into the red – essentially what the gear is not supposed to do – might not have come naturally at first.

But when the sound gripped the rock and roll scene by storm, entirely new ways of approaching the guitar were formed. These early efforts were made in era before stompboxes, by driving tubes into overdrive territory, but it wasn’t long before companies started developing devices that specifically created crunch.

Fuzz pedals hit the scene in the ’60s, but as anyone who has compared overdrive and fuzz effects knows, they’re very different beasts. Fuzz infused the psyched out tones of the counter culture with an over-the-top distortion, an extreme and obviously affected treatment of the guitar. The more subdued tones of overdrive were still likely to be extracted from valve amps. A slew of pedal developments in the late 1970s was to shake all that up though. Ibanez released a few overdrive models before the Tube Screamer hit the scene, but these were more akin to a fuzz than a sophisticated tube-like tone. The first compact pedal to approximate this sound was the BOSS OD-1, a classic in its own right.

Other notable overdrive and distortion pedals of the time include the MXR Distortion + and another BOSS model, the DS-1. Yet neither of these pedals rivalled the Tube Screamer when it came to a characterful and classy overdriven sound.

Its character made the pedal the perfect partner for guitar amps. The three incredibly simple controls, overdrive, level and tone, meant that it could be placed in front of a guitar amp, as a way to boost the level going into the amp, and tip it over the edge into distortion. The versatility of the Tube Screamer also makes it a great option for stacking. For example, using it as a clean boost, then sending it into another more aggressive distortion or fuzz can result in a tone that is more than the sum of its parts.

As you can imagine with a pedal that possesses such simple sophistication, it kept a few of its secrets under the hood. The original Tube Screamer – the TS-808 – was designed by Susumu Tamura with the objective of competing with the aforementioned BOSS OD-1 and MXR Distortion +.

It employed an op-amp circuit which produces the gentle overdrive that is typically associated with the Tube Screamer: symmetrical clipping. This style of distortion earns its name by clipping both the negative and positive amplitude peaks of a waveform equally. This circuitry puts out a sound that is redolent of vacuum tube breakup.

Much has also been made of the chips that are at the heart of the Tube Screamer. The original – and some say the best – was the JRC 4558 chip. There were inconsistencies in chip installation throughout the early life of the pedal, which gave rise to mods from the likes of Analogman. So if you have an old Tube Screamer and it doesn’t sound the way that the you hear about in the hushed and reverent tones of those who have experienced the wonders of the original, there is help out there! The evolution of the Tube Screamer continued, with varying degrees of success. The TS-9 came out in the early ’80s – the most aesthetically recognisable model and the favourite to many. Later in the ’80s and ’90s, the 10 and 5 series emerged respectively, with bizarre looks compared to the original. The TS7, or ToneLok model, ditched the green altogether.

It’s difficult to understand the motivation behind these models, other than Ibanez attempting to create something new and novel in this established line. It seems they did see the sense in capitalising on the cult status of the TS-808 and TS-9 models though, with a host of reissues that put these classics front and centre. Since 2004, the TS-808 reissue has been in production, with a hand wired, deluxe version hitting the market in 2008.

Ibanez have even expanded their remit to collaborate with other companies. For example, they teamed up with KORG to create the NuTube Screamer (complete with KORG’s NuTube technology). They also tapped boutique Japanese stompbox maker Vemurum for the TSV-808 model, which is inspired by the latter’s cult classic Jan Ray overdrive. And so the tale of this diminutive hero of overdrive continues. Will there be an end to the Tube Screamer story? It doesn’t seem likely. You might think that this humble pedal with only three controls hasn’t got anything else to reveal, but this is not only contradicted by its many variations over the decades, but by the way that people continue to seek out the original, or modify it. It all points to a future that will see the Tube Screamer continue to grace pedalboards all over the world. Clones of the Classic

So what happens if you can’t afford or find the Tube Screamer you want? Like any classic, there are many offerings on the market that are either a clone or a clone with extra features. Here’s a few for you to consider.

The most recent clone of the Tube Screamer to hit the streets is the Origin Effects Halcyon Green Overdrive. Origin Effects make pedals for the serious musician, with their reverred Cali76 that packs a studio grade 1176 clone into a pedal.

This brand new Tube Screamer clone leans on an adaptive circuitry that allows the player to get the same crunch and tone at a lower volume. There’s 3 modes to this circuitry — off, 1 and 2 — and you can change the Voice of the pedal between classic TS808 or MOD, which boosts the midrange frequency further up.

As well as a sleek design with its top address input, output and 9v DC, the build is of the highest standard, as Origin Effects always deliver on. This pedal brings class and sound together in a neat package ready for your pedalboard.

For more details on the Halcyon Green Overdrive head over to origineffects.com If you want every Tube Screamer packed into one tiny pedal, look no further. The JHS Bonsai is simple in size and design, but under the hood there’s a lot going on. It’s got 9 Tube Screamer modes — accessed via a selectable rotary switch — that scroll through the years of the Tube Screamer. Starting at OD-1 from 1977 to the TS-7 from 1999 then onto a Keeley Mod Plus and JHS’s own Strong Mod, it’s a surprise this pedal is of standard size and doesn’t cost 9 times the price of most pedals!

If you have never owned a Tube Screamer this might be a good place to start, but it might also be overwhelming to pick your favourite sound. Head over to jhspedals.info to read more about the Bonsai and each mode they have cloned. Some may argue this is not a clone, and they may be correct. Back in the 1970s Ibanez had a parent company called Nisshin and they put out pedals under the brand Maxon. Often refered to as the original green overdrive, this pedal is somewhat identical to the original TS808 Tube Screamer. While the controls are a little different — the Maxon has Drive, Tone and Balance — the internal circuit and the sound produced would pass any blind test.

If you want something different on your pedal board and the opportunity to rattle off this cool story get this Maxon OD808. If you want a different sound to the TS808, don’t bother trying to get it out of this! Maxon are stilling making these and they’ve reduced the background noise in the current unit. Head over to Maxonfx.com to read more. The size is a lot larger than one might want for effect of this type, although it makes up for it with top address input and output, and everything is well laid out. The tone of the Hudson Sidecar is right on point and the separate Treble and Bass makes for more variation.

If you want class, and don’t want to scream to world (pun intended) that you have a Tube Screamer or a clone, come no further. Head over to hudsonelectronics.uk for more details on how they made this clone. Steering you away from having to dig deep into your wallet and not so overwhelmed by choice is the EarthQuaker Devices Plumes. It’s a clone of the Tube Screamer offering 3 different clipping voices along with Level, Tone and Gain. What’s great about this pedal is that while is their version of a Tube Screamer, it’s not trying to be an exact clone.

Mode 1 has crunch and compression, Mode 2 has a wide open OpAmp drive for clean boosting, and Mode 3 has Asymmetrical silicon diode clipping which EarthQuaker Devices say will have more transparency with a loose feel.

For more details on this elegantly simple Tube Screamer clone head over to earthquakerdevices.com. 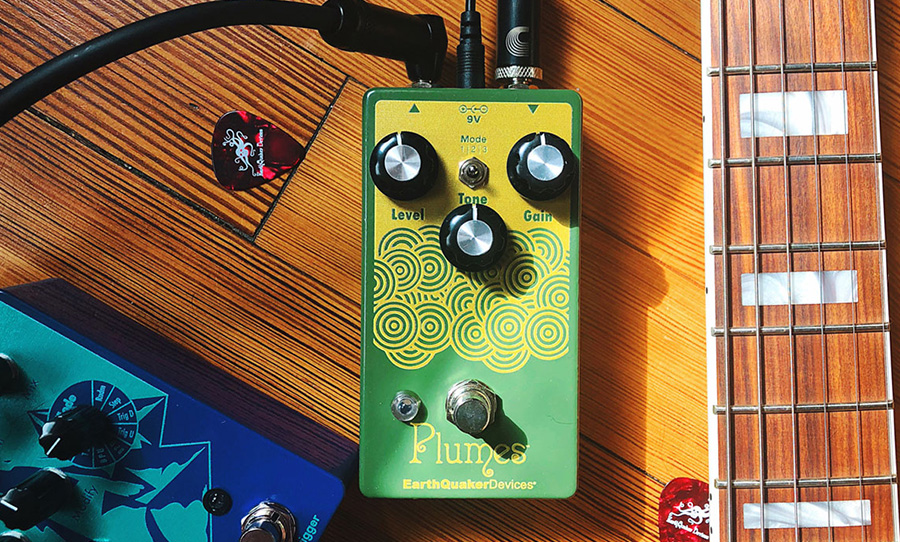 For those of you on a budget and wanting to keep your pedal board compact, here’s a small-in-stature, large-in-sound pedal — the Mooer Green Mile. It’s a Tube Screamer clone with two modes of Hot and Warm — adjusted via a toggle switch — along with Level, Tone and Overdrive.

While not at the top of everyone’s list for Tube Screamer clones, it’s size — or lack of it — and it’s price are a winner for guitar players who want a pedal that will replicate the classic sound of the original. There’s plenty of Youtube videos that compare this with the small Ibanez Tube Screamer, so you can dive in and check it them out for yourself.

For more on the Mooer Green Mile head over to mooeraudio.com.