With a string of EP’s under her belt Melbourne based ethereal electro darling Eliza Hull has built up quite a reputation for herself as a talented and unique presence on the songwriter scene and has shared stages with the likes of SAFIA and Owl Eyes. Her debut LP The Bones Of Us (Produced by Hayden Calnin, and Mixed by Jono Steer) is a characteristically ethereal record, offering transporting soundscapes and affecting vocal performances. Eliza Hull crafts a pretty yet textured collection of songs for her debut album The Bones of Us. Ethereal vocals and flawless production make this a debut to remember.

The Bones Of Us opens with Walk Away, a dark brooding track filled with dense electronic beats, thick ghost like echoes and a whispy falsetto. Reminiscent of Florence and The Machine‘s darker numbers, it is a sparse and haunting offering that comes to a climax in layered vocal experimentation before almost evaporating back into nothingness.

Hull manages to really showcase her vocal versatility on The Bones Of Us. At times refrained and delicate, she takes the listener with her to a place of vulnerability. Christopher, a beautiful lamenting number, co-written with songwriter Tim Gordine (Matt Corby, Lisa Mitchell) was first released on Hull’s sophomore EP The Ghosts You Never Catch. It reads like a complicated love letter to a seemingly complicated man.

Complete with broken promises and contradictions (after all what love is free of those?) the vocals float effortlessly above a fragile pooling soundscape. On some of the record’s bolder tracks such as Skeleton and My Army she taps into a more soulful side of her voice, yet occasionally teetering on that slightly cutesy, innocent type of vocal popular among contemporary Australian folk artists like Julia Stone and Lisa Mitchell. There is definitely a theatrical element to the way Hull uses her voice, which works very well being that the music itself is rather dramatic, a quality that I personally find incredibly engaging in modern pop music.

Though many of the tracks on the record are collaborative efforts, Used To is the album’s only duet and features the vocal talents of Mark Pearl (Texture Like Sun). Hull and Pearl’s vocals make for a heavenly combination. The use of harp gives the track a delicate ethereal quality especially when paired alongside Hull’s theatrical falsetto. The highlight of the song however is the crescendo of duelling vocals in the final minute. Lyrically the album succeeds in efforts of poetic nature. This is best showcased on Bella Lou which is the album’s most stripped back, bare and heartbreaking.

My favourite number on the record is Dreamer, and production wise I feel this is where Calnin really peaks. Lonely echoing vocals call out to an absent lover, whilst dark intense gameboy synths build an air of anxious intensity. An array of warped vocal samples filled with longing top it all off, coming together in a very emotive and rather rattling piece of art. Throughout the entirety of the album something about the deep, wet quality of the production continually evokes images of the ocean. A long lost lover on a lonely pier, a pooling tide, calm and serene yet capable of ferocity.

Altogether The Bones Of Us is a textural and very pretty collection of songs, predominantly exploring themes of love. The collaborations on the album, particularly the relationship between Hull’s songwriting and Calnin’s production come together in an effortless balance resulting in a beautiful and haunting work, that at times is bare and fragile and in other moments infectious and bold.  A must listen for anybody who is a fan of the likes of Kate Bush, or Florence and The Machine. 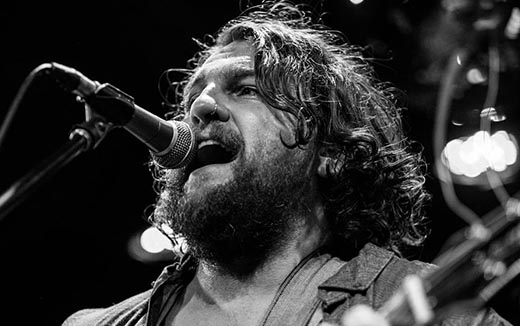 PREMIERE: HOWQUA elegantly pines for Her