Get into the Beatles' studio with The Masters of Sgt. Pepper
Skip to content
[gtranslate]
H 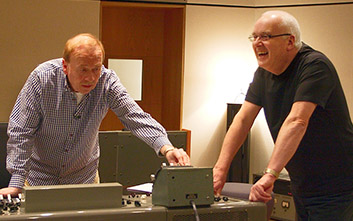 On the 50th anniversary of the iconic album, the engineers of Sgt. Pepper’s Lonely Hearts Club Band, Geoff Emerick and Richard Lush will be fixing a hole in the hearts of Beatles fans everywhere with a once in a lifetime Q&A event and exhibition named The Masters of Sgt. Pepper.

Presented by Planetshakers in Southbank, not only will the event dish the untold deets about the iconic album from a producer’s perspective, it will also be celebrated with performances by Leo Sayer and Davey Lane from You Am I. A must-see for any true fan of The Beatles, The Masters of Sgt. Pepper will provide unprecedented access into the studio where the Fab Four made their magic.

The event promises a panel of Beatles royalty disclosing all the behind the scenes details as well as a limited edition merch sale.

Lush has been immersed in London’s music scene ever since starting his recording career at EMI’s Abbey Road Studios in the 1960’s. He learnt from masters of the music industry Sir George Martin, Phil Spector, Phil Ramone and Mickie Most before recording some of the world’s biggest artists: The Beatles, Cliff Richard, Paul McCartney & Wings, John Lennon and The London Symphony Orchestra.

For the Beatles, Lush was a significant backbone to their musical success, working on more than a hundred sessions.

After joining EMI as a junior assistant at 15, Emerick went on to be a prolific audio engineer, majorly contributing to Sgt. Pepper’s Lonely Hearts Club Band, Revolver, The Beatles and Abbey Road.

All the finer details you’ll need are on the Facebook event, but the basics are below: The Fairchild compressor: an elusive icon of the studio