Festivals are both mentally and physically testing, there’s no doubt about that.

The combination of little (if any) nutritious food intake, the ingestion of (too) much alcohol and a severe lack of sleep are just the tip of the iceberg when it comes to the mortality-testing bootcamp that is the modern music festival.

However, all is well that ends well. And few things on this Earth are better than a marathon of live music alongside a select group of mates and 10,000 strangers. With this is mind, we’ve put together a helpful (illustrated, cos who likes reading without pictures) guide to festival survival. This is your go-to handbook. Don’t leave the house without.

Everything you need to know about going to festivals is now in one convenient place: Happy’s Ultimate Festival Survival Guide. We strongly advise not doing it in the Portaloos. This should be fairly obviously because, well, festival toilets are fucking gross. But for the sake of those less informed, we definitely recommend taking our advice.

That shit is not romantic. If you’re going to do it, go back to your tent. Or given the general hygiene levels that festivals generate, you might want to consider abstinence for a few days. Making out with a stranger in a mosh pit is fun. Having sex in a shit-covered plastic hotbox is not.

You know what also isn’t fun at a festival? Waking up on day 2 looking like a goddamn lobster and suffering from heatstroke. Most Australians have had the dangers of sun exposure burned into them from a young age, but that doesn’t mean you won’t see the occasional shirtless meathead roasting away in the sun.

Bring sunscreen, sunnies and a hat. And seeing as you or one of your mates is inevitably going to get burned, bring some aloe too. It takes about 30 seconds to slap on some sunscreen in the morning and flap hats are making a comeback. There’s really no excuse. Anyone who has been to Splendour will tell you that wading around in knee-deep mud is pretty much the worst. What’s even worse is doing so in your old Vans.

If you’re going anywhere that’s notorious for having muddy grounds, buy yourself a pair of gumboots beforehand just in case. Bring a couple of ponchos too (garbage bags will also suffice). Looking like a bum at a festival is way cooler than freezing your arse off in mud-caked designer jeans. Alex Cameron once told us “if you can smell your genitals from a standing position then you need a shower.” It’s the best piece of advice we’ve ever gotten.

Most girls probably already know this, so dudes listen up: wet wipes are a godsend at festivals. It’s the next best thing after having an actual shower for wiping sweat and slime off your face. Seriously, buy yourself a pack.

We’d also recommend having at least one shower – preferably early on before they get too filthy. We know, showering at a festival fucking sucks. But sometimes you just have to suck it up and do it. Nobody wants to be the smelly kid.

First of all, we don’t officially condone this, because you could actually get your ticket ripped up at the gates, and that would be devastating.

But if you do have to bring booze in, be subtle. Very subtle.

Beer cans in the spare tire is still a surprisingly good technique for smuggling. Definitely don’t bring in glass bottles; cans are the way to go. Goon bags have multiple uses so if you can smuggle one in, hold on to it for dear life. Vodka inside a watermelon is both delicious and refreshing (plus who would suspect an innocent watermelon). Small bottles of spirits can be smuggled in quite easily (think a Pringles can or toiletry bag).

Water is your best friend at festivals. (No, beer doesn’t count as water). The most common issue ambulance officers have to deal with at festivals is dehydration, which isn’t all that surprising. Most festivals offer free water refills, so carry a bottle with you at all times.

If you’re camping, be sure to bring a case or jerry can of sweet sweet H20. When you emerge from your tent in 35 degree heat with a rotten hangover, ciggi butt brain and a tongue the size of a steak, you’ll be glad to have it.

Get Your Tent Sorted First We know that the adrenaline is pumping and all you want to do is start partying, but trust us when we say this: putting up a tent in the dark when you’re wasted is pretty much impossible. Get that shit sorted before (or while) you start drinking. Having somewhere warm and cosy and upright to pass out in is the holy grail of festival luxuries. Don’t screw it up. Earplugs have two uses at festivals. One: protecting your eardrums when you get stuck next a 10 ft speaker stack watching Violent Soho. Two: blocking out the sound of two strangers going at it like drugged-up monkeys in the tent next to you. Come prepared.

Leave Your Instruments At Home This includes bongos, acoustic guitars, pan flutes, harmonicas, ukuleles and salt shakers. Don’t be that guy. You’re not going to impress anyone. In fact, you’re probably going to piss people off. Festivals are about other people’s music, not yours. So leave it at home.

Happy Mag's guide to Yours and Owls Festival 2019 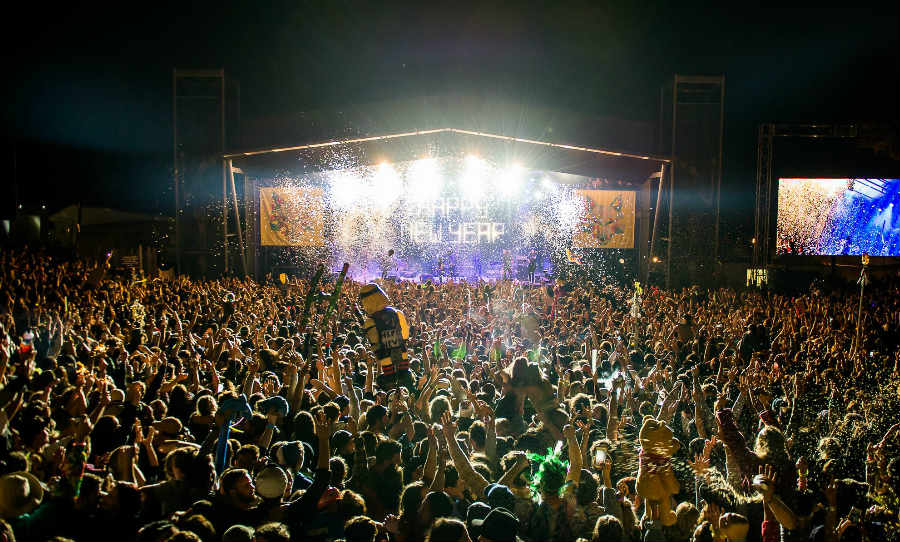