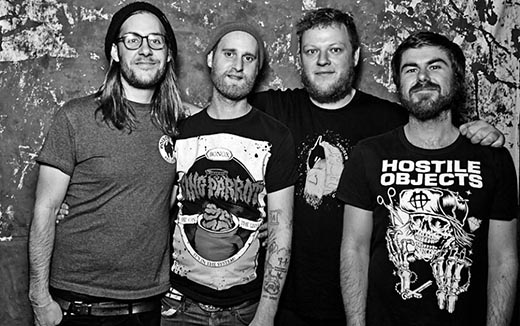 “I wish I could live in peace. I wish I could find some somewhere”. Amongst distorted bass notes echoes this desperate plea for refugees in the closing moments of The Smith Street Band‘s charity single Wipe That Shit Eating Grin of Your Punchable Face. The Smith Street Band have taken a stance on the asylum seeker issue and Tony Abbott, but will their effort stand the test of time as a true protest song?

The issue of asylum seekers is an important one to me. My parents immigrated to Australia from Sri Lanka twenty five years ago. Living in Sri Lanka during the civil war between the government and the LTTE was a nightmare for everyone back then. My father once saw a Tamil man burnt alive by a mob in the street. My younger brothers and I were lucky to have a life away from that madness where we didn’t have to want for anything and our safety was all but guaranteed. But not everyone is that lucky. Think of the pure desperation needed to board a small, overcrowded boat that is anything but sea worthy. And you’re not making the journey alone, you have your family with you too. This isn’t some kind of thrill seeking, white water rafting bullshit. This is a life and death decision, and death is quite a possible outcome.

The levity of the protest song is one that depends on the event that it concerns itself with. Penning a protest song about Taylor Swift’s exclusion (or God forbid, inclusion) in the Hottest 100 countdown could potentially be humorous yes, but ultimately would end up as shallow as the ‘issue’ it had taken up. The truth is songs of protest are hard ones to add longevity to. They have to be crafted in the artist’s voice, yet still be able to champion the cause without overshadowing the other. Rock music is always better suited to protest anthems. Aggressive guitars, echoing cymbal crashes and growling vocals is all you need to communicate that your song is not a happy chappy. Authenticity (however you manage to achieve it), is the key.

The song in question, Wipe That Shit Eating Grin of Your Punchable Face will sit comfortably within The Smith Street Band’s back catalogue for years to come. Wil Wagner’s distinctly Australian drawl, the loud pounding guitars and the straight to the point lyrics are all a part of the band’s staple. The lyrics for the first half of the song meanders a little which for the most part works to set us up for the dramatic shift in tone that arrives in the second half. It’s here that the meat of the tune sits. “Just to keep your job you’re putting bodies in the ground, drowning refugees at sea, kiss babies screaming vote for me, I’ll take you to the future via the 1950s” hollers Wagner amongst the fury of distorted guitars and drums. The imagery definitely hits hard. It’s gratifying to see a young Aussie band draw attention to this issue in such a blunt, non bullshit manner. What is most endearing about Wipe That Shit Eating Grin of Your Punchable Face is the initial reaction it causes. As Will Wagner shouts those words you can’t help but grin like an idiot. If we had the chance to yell something at Tony Abbott’s face that would feel like the most appropriate.

But can a group like The Smith Street Band write a genuine protest song about asylum seekers? Sure the anger is there and the passion is evident, but how involved is the band with the issue? I was legitimately surprised when the song dropped. Part of what helps is that the band points the finger at our (read with sarcasm) beloved Prime Minister Tony Abbott. To be honest it is quite easy to criticise our budgie snuggling leader, the man has done more than enough to dig his own grave. When you really look at it this is really a song that protests Abbott and his government’s policies rather than one that champions the rights of asylum seekers. Is that a smart move? In a way yes. The last thing we want is a Melbourne rock band claiming they’re here to maintain the rights of asylum seekers. No matter which way you look at it it will never seem completely genuine. Not to say the band are not passionate about the issue, but in this case they’ve done the better thing of penning a fuck you song addressed to Tony Abbott.

There are many great politically motivated songs penned by Australian artists. Archie Roach’s They Took The Children Away, Goanna’s Solid Rock and of course Warumpi Band’s Blackfella/Whitefella all brim with passion and each of those songs hold a place in our musical history. Each of these songs, and there are many more out there, recall the narrative of our country’s past and attempt to lead us to a place where we can reconcile the wrongs. It is with that purpose that music like this is able to have staying power and is effective as a protest song rather than a gimmick.

I’m not doubting Will Wagner and co.’s legitimacy; in fact it is the genuine nature of The Smith Street Band that attracted me to their music in the first place. Yet the sarcastic, tongue in cheek nature with which the song is framed unfortunately detracts from the message the band are trying to convey. Yes any person with a heart can see the treatment of asylum seekers is more than barbaric, that is as clear as day. But where does the dialogue go from here? The song doesn’t really give us an answer, just kicks up some dust and then leaves the issue up in the air for the rest of us to ponder. In an interview with The Age Wagner stated “Who really gives a shit what a 24-year-old in a band thinks, but hopefully a lot of people around our age and our demographic will think about it and become a bit more aware of this issue.” Honestly that sounds like a round about way of covering his ass if the reception to the song wasn’t favourable.

And while I may unabashedly grin when I hear this song I can’t help but feel that the band have missed the chance to do something greater. Yes it’s full of anger and passion and it draws our attention to a worthy cause. But does the song have any staying power? Not so much. It’s probably unfair to compare the pair, but look at the legacy Midnight Oil carved for themselves. Their 26 year career is defined by their politically charged music which has stood the test of time, regardless of Peter Garrett’s recent actions that defy his earlier sentiments. Twenty years from now will our children know the lyrics or even the name of this ever so frankly titled song?

By no means am I condemning The Smith Street Band. In fact I implore them to write more songs like this and continue to fuel dialogue. The more kids growing up with music like this the better. Happy writer Nick Hartman said to me that it would have been better if the band recorded an album around the issue rather than this one off song. And I have to agree with him. The money donated to Asylum Seeker Resource Centre from downloads of the song is certainly a worthy cause and I encourage each and everyone of you to do it. But I sincerely hope this isn’t the last time we hear from The Smith Street Band on this issue. Please, continue to develop your craft and your stance to raise awareness. I cannot stress how important that is.

What The Smith Street Band do from here moving forward is what will define this song. If they move on and continue their usual brand of punk rock then this song will lose its urgency, legitimacy and ultimately be remembered for its silly name. However should they continue on this path and make activism part of their band’s mission statement, then the change that is simply alluded to in this song may indeed become a much better defined focal point and this can truly become a protest song.