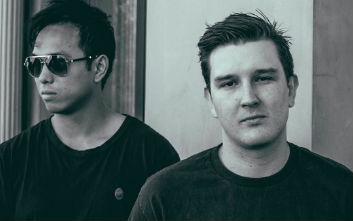 From The Black Keys to Simon and Garfunkel, duos in music have never failed to amaze at their ability to create the emotive power of a chamber orchestra with minimal means. Over the years, veritable tsunamis of sonic brilliance have emanated from humble two-pieces and Melbourne’s Saint Henry are no exception. Here are the band’s picks for the best double acts in the business. Like the moon landing, some of the greatest things to ever happen, happened in pairs and Saint Henry have picked their fave musical duos to add to the list

DZ have been a personal favourite of ours for many years since their career defining set at Splendour in the Grass in 2012 when rain brought everyone to the main stage under the tent to listen to their new single ‘No Sleep’. We try to get to every gig these guys put on as they are constantly pushing the boundaries in terms of sound and musicianship. Brutal shows, heavy records and top fellas too.

King of the North

Our Melbourne two piece brethren. King of the North are some of the finest riff laced rock and roll a two piece has to offer. Coming off massive 40+ date European tour to come back to Melbourne to smash out stella hometown show at Ding Dong lounge. A soon to be released album on the way, have placed these guys firmly in the bracket of ‘about to explode’. They have 3 amps, a pulsating drum kit, and a work ethic that is unparalleled. These guys are the real deal.

Where would we all be without the almightily White Stripes? After the constant debate of brother and sister? Husband and wife? Genius and consistent? Meg and Jack defined the two piece rock band and elevated it to another level. Detroit punk and blues rock fuelled by scintillating guitar work and a drummer that produced consistent rock and roll beats that fitted perfectly into the scope of the band as a whole. Watching old YouTube clips of them playing Black Math (wait for the fuzz at 1:01) just goes to show how these guys defined a whole genre and era.

Entertainment falls short of describing Twenty One Pilots. After constantly touring Australia by starting out in some of the smallest venue’s they are now commanding arena status as their most recent announcement shows. Abstract lyrics backed behind synth and a ukulele followed by drummer that has the power and stamina of thoroughbred on cup day but only if the race is going for a solid 45 minutes. Anyone who has seem these guys in the past (most recently out here for Groovin the Moo) will appreciate what a show these guys put on.

Anthems. Plain and simple. Glorious anthems. The Japandroids have a song for every moment in your life and in turn can change the momentum of your day within seconds. Every song is an ode to Bruce Springsteen if only he was limited just to one extra band member. Japandroids break through album ‘Celebration Rock’ was defining, as it is inspirational. A must listen.