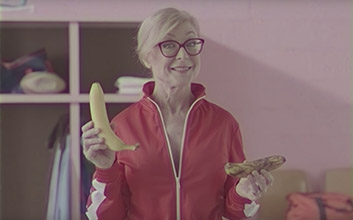 As it turns out, STIs are actually on the rise amongst the older population, who tend to opt out of using birth control (condoms), as accidental pregnancy is not a concern. As a result, prevention of infections is far less prevalent.

The video features Harley talking to directly to her audience in a gym bathroom, proper sex-ed style.

“Contrary to what many of us think, sexual desire doesn’t diminish with age. In fact, it’s one of the last functions people lose in their golden years. That’s because today, thanks to advances in medicine like the pharmaceuticals prescribed for erectile dysfunction, what used to look like this,” she says, holding up a small, withered banana, “now looks a lot like this.” She hold up a larger, more erect banana.

There is also a website dedicated to the campaign. It features a whole bunch of easy-to-access information on STIs, sex positions for the less mobile, and the different protection avaliable; plus some supportive advice, such as:

“If you’ve come this far it’s because you know how to use the Internet and because, despite your age, you’re still having sexual relations.

Good for you. You’re a role model for your peers and the envy of people half your age. But with great power comes great responsibility and that means always having safe sex. Because love knows no age and neither do STDs.”

Watch the video below, and pass onto anyone you reckon might benefit. Nobody wants to be 70 and have chlamydia.