Melbourne indie psych pop four-piece My Elephant Ride have a sweet new mind-bending tune for your elephant earholes. A dreamy psychedelic trek through the mystical peaks of introspection, their latest single In the Water is our first taste of their soon to be released debut album. Melbourne’s My Elephant Ride stomp their way into the indie-psych game with the whopping In The Water. There’s no way you’ll be forgetting this tune.

Often found sporting animal masks and coming up with cool visual projections, the four mates met at uni while studying music. Deciding to collaborate on a few tunes, Joe Berridge (vocals/guitar), Nathan Abbey (vocals/guitar), Chevaunne Keleher (vocals/keys) and Ollie Whelehan (drums) soon released their debut EP and went on to start up their own indie label Wigwam Records (Mihra, Ministry of Plenty). Going from strength to strength, they’ve now enlisted the ace mixing skills of King Gizzard and the Lizard Wizard’s Stu Mackenzie on their latest single as they hit the psychedelic slopes.

Recorded in the Wigwam studio, mixed by Stu and mastered by Joe Carrera at Crystal Mastering, In the Water ventures into a more dreamlike psychedelic soundscape than their previous stuff. A swirling guitar-driven tune with a smooth drum beat, it is a sweet machine of mesmerising sounds. Standing atop this mountain are the vocals: lazily rolling in like mist off the mountainside, they blanket the tune in darkness. As the chorus harmonies add layers of melancholy, the haze eventually turns into a whiteout when the raging two minute guitar outro hits.

A trancelike tune with plenty of fuzz, you can hear the King Gizzard stamp of approval firmly placed on this one. On working with the prolific psych rocker, Berridge said, “It was a real pleasure working with Stu, he is such a laid back guy. He has a lot of knowledge about mixing sounds and effects. I learnt a lot from the few days we worked together. ‘Everyone is lazy when they’re tired’ is the opening line that he sings from King Gizzard’s latest album ‘In your mind fuzz’. I realised really quickly that one of his secrets to getting so much quality work finished is to work even when you’re tired!”

While Mackenzie may have infused the fuzz, Berridge injected the emotional pull. He says the tune is based on a personal experience where he had to let go of an oppressive relationship: “Someone might have really hurt you but you are still madly in love with them. They might coerce you into doing things that seem so foreign to you but within love there can be blindness. The main character is searching for the other beautiful being and will do anything to try and make it work but it’s kind of like a moth drawn to the flame, your conscience is telling you this could be destructive but you do it anyway. They both go through a whirlwind…and come out the other end staring at each other, but finally ready to let go and walk away.”

A sonic journey through a dark and dreamy mountain range, In the Water is both tranquil and foreboding. If your eyeballs didn’t catch its video clip premiere at Melbourne’s Gertrude St. Projection Festival on the weekend, then be prepared for the magic of the Himalayas and Dr. D. Foothead combined. Back in the Wigwam studio, My Elephant Ride are now working on another mind-bending single with Mackenzie, and will hopefully release their debut album later this year. Keep your elephant ears wide open! PREMIERE: Marlinspike crack open a time capsule from the acid-soaked 1970s to bring you Technicolour 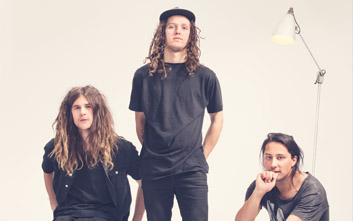 PREMIERE: Feeling lost? Find yourself within The Rollercanes' new single I Know You're Lonely