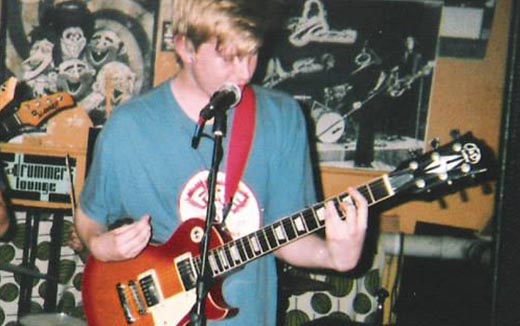 There’s something super charming about bedroom recordings. Everything seems a little more personal, visceral and real, and our airwaves are becoming increasingly proliferated with tracks recorded using cheap, simple recording setups due to advances in digital recording software. An obvious example is the bedroom producer, à la Chet Faker, whose refined style is being replicated and churned out in troves each week. But, as it did 50 years ago, garage rock is still hugely reliant on basic, lo-fi recording setups to achieve it’s signature gritty, unpolished vibe, and Jarrow know this all too well. Dan Oke sticks to the garage rock formula with his jangly lo-fi pop on Legitimate, the debut EP from Jarrow.

Jarrow is the moniker for Dan Oke, a Melbourne-based songwriter who has been playing in bands around the Victoria capital for the last few years in bands like 1283 and Vinyl Splinters. Back in 2014 he began recording a few demos before putting together a band with a bunch of mates who also play in bands like Bnash, The Factory, Séb Mont and Thee (so many bands).

Despite the troves of fellow musicians that surround him, Oke writes and records Jarrow’s material all by himself in his bedroom in Footscray, or at his beach house in Anglesea. Sticking loyally to the garage rock formula, Oke uses the most basic of recording setups: one mic, a cheap interface, and Ableton recording software. What you get is some pretty awesome jangle pop, compressed into a gritty little package called Legitimate.

Last Monday is the lead single from the EP, an sunny piece of pop rock with sharp guitars and reflective lyrics. Untitled kicks off an as acapella drenched in reverb before kicking into breezy guitar pop heaven. There’s a definite Real Estate vibe in the twang of the guitars and the softly searing synths. The programmed drums are warm and tight, nicely offsetting the sharp jangle of the guitars and the slapback echo of the vocals.

The whole EP feels incredibly relaxed and intuitive. Synth lines feature sporadically like they were a mere afterthought, placed neatly where they’re needed before receding to the background. Vocals are warped and manipulated on the fly at random places and it really feels like Oke is having a blast, experimenting with sounds and ideas at his discretion. What Have You Done To Yourself? has got some balls to it, blasting off with fuzzed out guitars before calming into a 8-bit digital verse. Oke’s voice is charming in its unwavering puerility and his lyrics are relatable; tales of relationships and the tribulations of youth: “Well I was shy of seventeen/On a downward spiral in a limousine / This is closest thing I have to ketamine.”

Jarrow has already been getting some love from national broadcaster Triple J, not surprisingly since they have a definite knack for creating charming garage rock. Be sure to keep a close eye on them.

They are launching the EP on the 29th of May at The Dancing Dog in Footscray with some support from Biddlewood and 130.

Legitimate is out digitally on Friday May 15th. The Rebirth of the Ruminaters: Le Shiv drop debut single No Freak