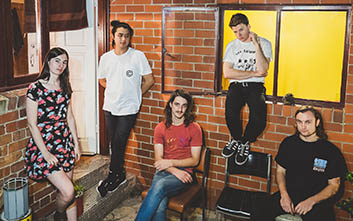 Five-piece Hooper Crescent is Brunswick’s answer to simple, accessible, catchy as hell noise pop. Originally releasing a demo EP of four songs in 2014, the band then went on to play their first show in December the same year and have since been gigging at places like Fitzroy’s The Old Bar and The Workers Club. Now Hooper Crescent are ready to releasr their second EP, Waiting Room. Like a shot of adrenaline to your heart, Hooper Crescent deliver their bold sophomore EP Waiting Room. It’s as infectious as noise rock gets.

First things first, this is not for the faint hearted. Unlike other safe, commercially churned out releases, this EP seems to have been specially handcrafted by a number of ambitious muso’s and other creatives – but really, what more would you expect when VHS Dream’s Matthew Hosking is the mastermind helping record and mix? Defying any rules that suggest songs should be short and sweet, Waiting Room presents six numbers residing between three to eight minutes instead. Savour it.

Shooting Fish In A Barrel is first up, introducing listeners to Hooper Crescent’s signature noise pop sound. Track one is almost two songs: the first easing us in with a fun pop-driven melody, and the second being full of jagged guitar riffs and an outro of electric window-shaking reverb. Track two, Everybody Dies, follows opting for a cruisier pace and raw, meaty vocals not unlike The Smith Street Band’s Wil Wagner. It’s not a particularly surprising song, just plodding along simply instead, but that’s not necessarily a bad thing. Plus the introspective lyrics of “But you can’t steal money from a bank that has no…DOUGH!” is something I can see myself singing/yelling back at a festival/laneway gig/house show along with 50+ other people.

Traffic Jam clocks in at a solid six minutes, allowing space for drawn out sections where vocals take the spotlight and adequate time to build momentum with layers of clashing cymbals towards the end of the song. After a steadily growing bridge of “There’s a traffic jam, and no one seems to notice” the song breaks down into a full-bodied instrumental finish with a heap of wobbling textures. I’ll Be Around draws on a relaxed structure similar to track two before flowing into Upside Down, one of the more upbeat songs on Waiting Room. The five-piece shine in this number, juxtaposing a light finger-tapping rhythm with brooding and kind of unnerving pedal play around the two and a half minute mark.

The Waiting Room EP then rounds out with the drawn out, somewhat experimental Sunspots. As the wildcard on the release, Sunspots consists of a cleaner, more melodic composition that spreads itself over seven and a half minutes. Intricate and incredibly pretty guitar work paired with climatic drums and the softly sung vocals all dance around together in harmony to create arguably Hooper Crescent’s best work.

The EP is a mixed bag of genres, sounds and textures – not unusual for a young band getting their start. Offering some catchy noise pop hooks amongst rougher shoegaze section with a dash of ambient alt-rock, Hooper Crescent has a solid foundation to hone in and build on for future releases.

Hooper Crescent are holding their Waiting Room EP launch at The John Curtin Hotel in Carlton on Thursday 25 Feburary, supported by Beloved Elk, Waterfall Person and Glaciers. Sounds like a trip to Scandinavia, right there for you in Victoria – don’t miss it!