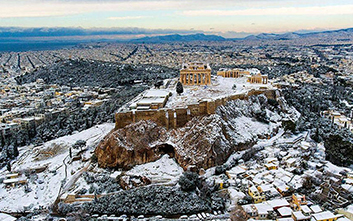 Over the weekend while Sydney experienced its hottest night ever recorded, in Greece the weather was the complete opposite.

Athen’s famous historical landmark the Acropolis, became covered in a white blanket as snow endlessly fell throughout the capital city and parts of the country. Although the rare event generated disorder throughout the city, it did provide precious images from an aerial point of view.

As if it were a fairy tale, snow draped across Athens, covering one of the world’s most historical monuments, the Acropolis.

Throughout Greece, temperatures reached sub-zero, forcing schools to close, flights to be cancelled, and 10 shelters to open for the homeless as well as a state of emergency in some parts of the country.

Snow in Athens is common only for very short periods of time. The oddity of thick, white blankets covering the city for more than a week only adds to its stunning and enchanting imagery.