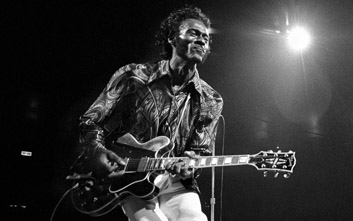 The music world is in mourning at the loss of Chuck Berry, the groundbreaking guitarist and songwriter who personified rock n’ roll.

Berry’s influence is as wide as the ocean, and even the largest praise amounts to just a drop when compared to his mountainous legacy. Celebrate the man who put rock on the timeline with 6 of the best covers he ever inspired, performed by a set of musical legends in their own rights. There are hundreds of Chuck Berry covers out in the ether, a tribute to the undying legacy of the rock innovator. Here are 6 of the best of all time.

John Lennon – You Can’t Catch Me

Every single member of The Beatles seemed to cover Berry at some point, the band themselves being known to regularly play his hits onstage.

John Lennon’s version of You Can’t Catch Me is eerily similar to Come Together, especially in the intro (as if that’s a bad thing). While most Berry covers were down the line, Lennon showed more of a willingness to change up the classic formula here.

Roll Over Beethoven is so damn perfect for ELO it hurts.

The King and Berry sit side by side in terms of rock influence. Both innovators and genre-pushers of the highest calibre, it’s not surprise that Presley’s cover of Berry’s iconic Johnny B. Goode is a stunner.

The Animals – Around & Around

The UK seemed to feel rock’s influence harder than America at a few points on their timeline, and The Animals were certainly a group who jumped on the bandwagon.

Below is some gorgeous, remastered footage of the band performing Around & Around.

Perhaps the most fanatical devotees to the church of Berry are The Rolling Stones, who released a blinding cover of Carol as part of their 25th studio album.

Blue & Lonesome, released in 2016, is a ridiculously great cover album from the Stones, yet this track stands out with a particular force.

The Beatles – Rock and Roll Music

And of course, there had to be a Beatles version in here. If you can block out the sound of screaming fans, you’ll here the Fab Four at full force performing Rock and Roll Music to a stadium crowd.