The Beatles’ Sgt. Pepper has hit the Billboard charts 50 years after its release in 1967. The 50th anniversary stereo mix of the record – done by Giles Martin, the son of the Beatles producer, George Martin – jumped to no. 3 just a week after its release. The new 50th anniversary edition of the Beatles’ Sgt. Pepper’s Lonely Hearts Club Band has hit the top of the Billboard charts 50 years after the original’s release.

As the LA Times note, in terms of total equivalent sales factoring in streams, Sgt. Pepper logged 75,000 sales last week, second only to rapper Bryson Tiller’s True to Self, which tops the chart with equivalent sales of almost 107,000 copies, and Kendrick Lamar’s Damn., at no. 2 on sales of 84,000 copies.

However, on Billboard’s sales-only chart, the album hit the top spot with 71,000 physical and digital sales, compared to 47,000 for Tiller’s True to Self.

For the 50th anniversary edition, Paul McCartney and Ringo Starr, along with Yoko Ono and Olivia Harrison, authorised Martin to go back to the original tapes and rework them.

If you haven’t given the album a spin, you should definitely do so. Giles Martin’s new mix gives the album a new dimension, with Ringo’s drums punching through the mix, and vocal harmonies and effects shining in a way that they never did on the original.

The second disc of the 50th anniversary edition features a whole bunch of previously unheard takes of all the album tracks, plus singles birthed from the session (Penny Lane and Strawberry Fields Forever). Check out the album’s title track and Lucy In The Sky With Diamonds.

Have a listen to the new mix below. 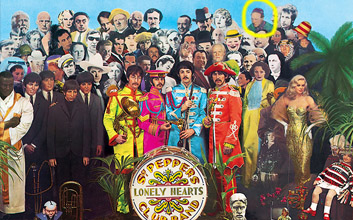 "My grandfather was on the Sgt. Pepper's album cover": Read the fascinating story From the vaults: Listen to a rare, unreleased take of the Beatles recording 'Sgt. Pepper’s Lonely Hearts Club Band'