Nick Cave is an artist, performer, educator and “foremost a messenger” who works in a wide range of media including sculpture, installation, video, sound and performance.

Not to be confused with the antipodean singer and screenwriter, this Nick Cave is best known for his beautiful Soundsuits – “sculptural forms based on the scale of his body” which “camouflage the body, masking and creating a second skin that conceals race, gender, and class, forcing the viewer to look without judgment” or prejudice. 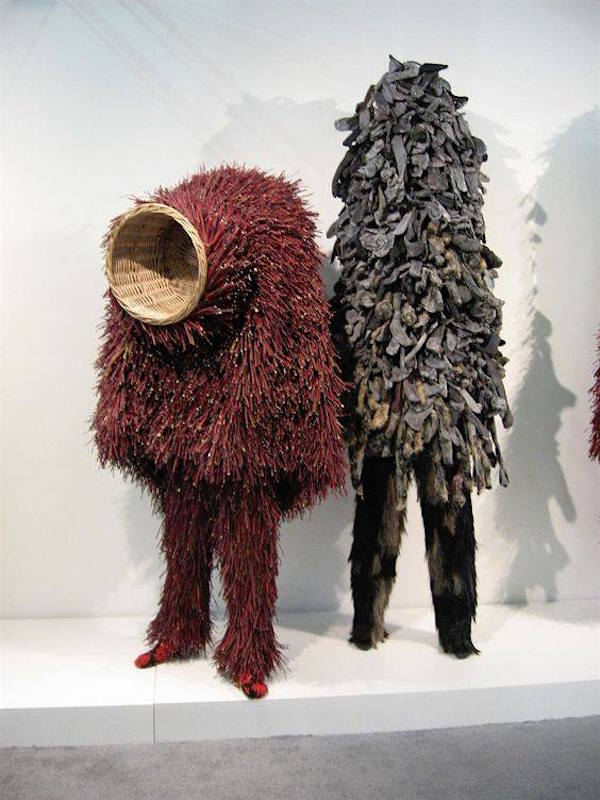 The bizarre, childlike and alien artwork of Nick Cave elevates the wearer beyond any normal means of perception, and outside any forms of judgement.

The idea for Soundsuits came about as a response to thinking over the brutal police beating of Rodney King in 1991. As Cave recalls:

“It was a very hard year for me because of everything that came out of the Rodney King beating. I started thinking about myself more and more as a black man—as someone who was discarded, devalued, viewed as less than.”

“I started thinking about the role of identity, being racially profiled, feeling devalued, less than, dismissed. And then I happened to be in the park this one particular day, and looked down at the ground and there was a twig. And I just thought, well, that’s discarded, and it’s sort of insignificant. And so I just started then gathering the twigs, and before I knew it, I was, had built a sculpture.”

Cave carried the twigs he had collected in Grant Park, Chicago, back to his studio where he drilled a small hole at the base of each one. He linked these together with a wire before attaching them to a large piece of material. From this he created his first wearable sculpture or Soundsuit:

“When I was inside a suit, you couldn’t tell if I was a woman or man; if I was black, red, green or orange; from Haiti or South Africa. I was no longer Nick. I was a shaman of sorts.”

Inspired by this incredible sense of freedom and empowerment, Cave began making more and more outrageous and fabulous creations from materials he found in flea markets and thrifts stores across the country.

Cave admits he never knows exactly what he is looking for or how he will use it once found. When he does find some Soundsuit suitable object he will spend considerable time working out where best on the body this item can sit. When this is finally resolved he then develops each design organically from this point.

The finished sculptures are worn in performances devised by Cave. There is an obvious similarity between Cave’s Soundsuits and Leigh Bowery’s performance costumes from the eighties and early nineties. Both take traditional crafts (needlework, macramé and crochet) and use them them to create powerful and beautiful works of (wearable) art. A selection of Cave’s Soundsuits are for sale at the SoundsuitShop.