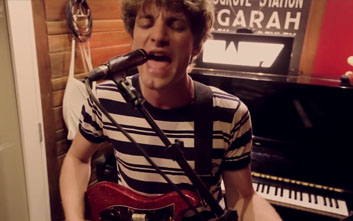 A week after Alex Lahey dropped by Enmore Audio to lay down an acoustic performance of her track Perth Traumatic Stress Disorder, Straight Arrows frontman Owen Penglis stopped by to play a solo version of the band’s latest single Out & Down.

True champions of the Sydney underground scene, Straight Arrows have been flying the flag for Australian garage rock for years now, somehow maintaining a consistent gigging schedule that entire time. Straight Arrows’ Owen Penglis stops by Enmore Audio for a stirring solo performance of the band’s recently released single Out & Down.

Having become one of Sydney’s most beloved bands, Straight Arrows have played alongside acts like Ty Segall, The Oh Sees, DZ Deathrays, and many more.

We would’ve loved to have the whole band along for the performance, but with knowledge of their reputation for a raucous live show – we still wanted a studio standing at the end of it all. So, Owen stopped by solo.

Like an ode to the lo-fi garage rock of the late ’60s, check out the video for a glorious drum loop and Owen’s stellar harmonica playing.

See the man himself spinning vinyl at our Happy Issue 7 launch this Wednesday at Young Henrys Brewery, Newtown.