“If you truly care about your children and your grandchildren, then why are you not acting on something that is going to totally destabilise their futures and totally destabilise what they’re going into as adults? Why would you put that suffering onto them?”

That was a sentiment from Luca Corby, one of the leaders in last week’s rally for climate justice. It’s a question a lot of young people are asking our politicians at the moment; 1.4 million Australians by last count, and on Friday, the question resonated through cities across the world.

Leading Wollongong’s climate strike contingent with Luca was Laura Charlton. They’re both in year 12. They’re smart, they want pragmatic change, they united their city in a shared call for action.

If you’re not familiar with School Strike 4 Climate Australia, it’s a movement inspired by 16-year-old Swedish student and activist Greta Thunberg. Last year she garnered worldwide attention when she began skipping school to demand that the Swedish government reduce carbon emissions in accordance with The Paris Agreement.

By December, her actions saw more than 20,000 students hold at least 270 school strikes in cities around the world, including Melbourne and Sydney. It’s an organised movement with specific, tangible goals.

Speaking to the Luca and Laura at the rally, we found there was a lot more to the school strike than we we got at face value. Some key takeaways are these:

In Australia, the strike has a clear agenda, and three straightforward outcomes

School Strike 4 Climate Action has three demands that are universal across the movement in all Australian cities.

What’s not outlined in those goals, but is clearly an overarching theme to the strike, is discourse around climate change. The movement aims to spread awareness, and by design, it demands to be noticed, and wants you to get talking.

The climate strike doesn’t target any specific political party, because “ultimately we need everyone in parliament to be working together on this. We need the action now, and we can’t have this argument surrounding it,” Laura said.

“We think it’s really important to target all parties and say ‘all of you need to step up. It isn’t on one of you; it’s on every single person because ultimately every Australian’s going to be affected by [climate change].'”

“I know Julia Banks has recently come out and said that she’s in support of the protest, and she’s a former Liberal MP. I think that just shows that it should be depoliticised. It’s an issue for our future that we need to solve now,” Luca added. The protests aim to support people working in unsustainable industries

Under the pretence of an Australia powered entirely by renewables by 2030, School Strike 4 Climate Action acknowledges that people whose jobs centre on non-renewable energy will face unemployment if they can’t change with the industry. The strikers know this, and ask for training programs to support workers in the switch to renewables.

“Yeah retrain and I guess revolutionise the process we already have,” Luca said.

In the case for Wollongong, the city’s steel works are powered by metallurgical coal. It’s not as bad as thermal coal, but mining it from the earth is.

“Especially with regards to the defunding of the CSIRO and stuff, we really want more effort put into new ways of creating those things that you kind of need coal for,”  Laura said.

“So many people work in the steel industry, and we don’t want them to end up out in the cold because eventually the coal is going to run out and what do you do then? Climate change impacts people who are vulnerable. The effects of natural disasters, rising sea levels, drought, and changing weather patterns are felt by everyone, but even more so by those living in poverty.

We asked Luca and Laura what they’d say to an Australian politician in regards to climate change if they got the chance, to which Laura replied:

“I would like say don’t betray the Australian people for your own personal gain or because you’re scared of losing one of our major economies, because ultimately losing the export of thermal coal isn’t going to be as horrific as hundreds of vulnerable people dying of heat exposure, cold exposure, and natural disasters. That’s going to be on your conscience if you don’t change something now.” 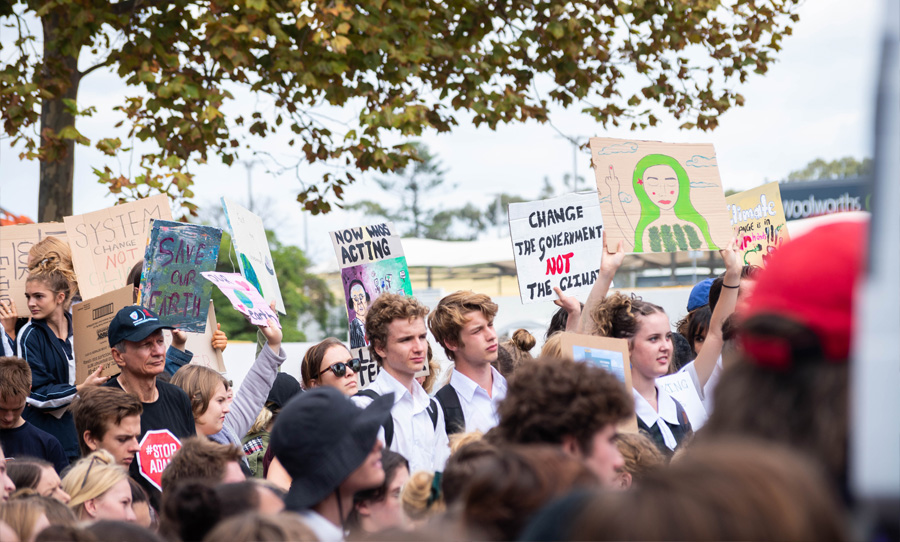 Last year Luca and Laura organised to take high school students from around Wollongong on the train with them to Sydney’s first school strike. They filled every single carriage to capacity with students.

“I remember the first time that I walked up to Wollongong station and I was expecting there to be maybe 50 or so people there, and I arrived and there was a group of over 100 students just outside, all with signs, all in uniform, getting really excited and you just felt really, I guess engaged, and you kind of realised, ‘Oh wait we could actually do something big here and we could actually end up changing things in a tangible way,'” Laura said.

This year they decided to have their own strike in Wollongong, and again, it exceeded their expectations. The rally drew a huge crowd, with a march forming a dense line of protestors about a kilometres in length. As a nation, Australia’s participants jumped from thousands to 1.4 million.

While the future of climate change policy is unclear, so are the futures of students and young people around the world. One thing that’s certain, however, is that they’ll not allow for policy makers to take no action. They demand change now.