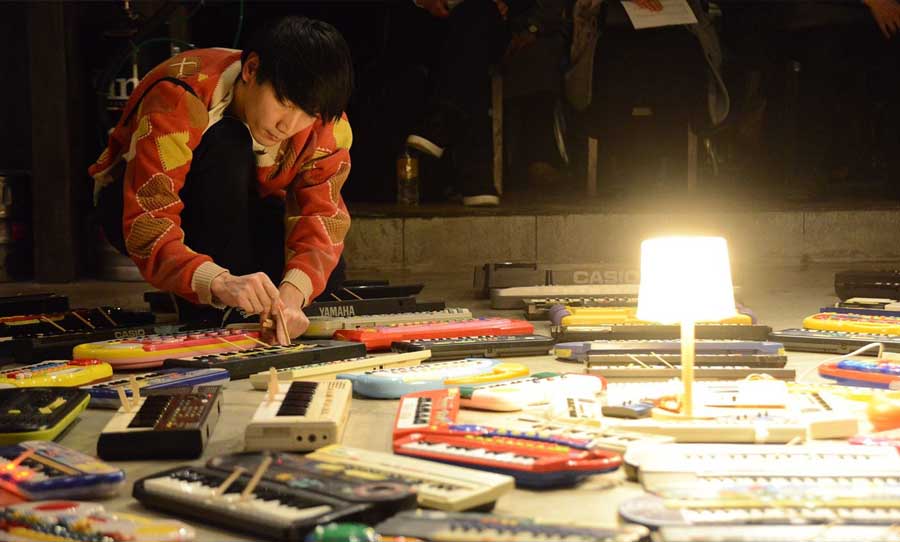 Asuna is a Japanese sound artist bound for Sydney for the Australian premiere of his latest live creation, 100 Keyboards. The project involves playing the same key on 100 cheap or broken keyboards at once, building a sonic moiré effect which apparently, must be heard to be believed.

The resonance of the room and minute discrepancies between keyboards (caused by anything from bad tuning to battery level) all play a part in the feel of each performance, making every show different for not only the audience, but Asuna himself.

Ahead of his three shows in Sydney this weekend, we caught up with Asuna to find out more. What happens when you play the same note on 100 keyboards at once? We chat to Japanese sound artist Asuna about his awe-inspiring new project.

HAPPY: Hey Asuna, how are you? What are you up to at the moment?

ASUNA: I am currently on a world tour of 100 Keyboards. I toured through Europe in August and September and now I am in Australia. I’m going to Canada and America next January.

HAPPY: 100 Keyboards looks to be quite a special show. How long was this idea forming in your head, and what was the moment that made you realise it would become a full show?

ASUNA: When I was in my teens, I was making music on my computer and became interested experimenting with sound. I was also playing in lo-fi experimental punk bands. I noticed the complexity of the swing sound on a toy keyboard. Those interests and fascinations combined led me to this type of performance.

HAPPY: Many artists have explored cheap equipment or broken things. What is it about run-down objects that inspires you?

ASUNA: Toys and cheap equipment aren’t really what inspires my performances; it’s more that I’m interested in the phenomenon of sound. I think it’s the sound itself that becomes the work; not run-down objects.

HAPPY: I’ve seen a ‘rock’ version of 100 Keyboards online, in which you hit the rhythm button on every keyboard. Does the performance change every time you play? Is that an attractive idea to you?

ASUNA: Thank you for watching it! Toy keyboards always have a rhythm button and they all have sounds such described as ‘rock’, ‘pop’ and ‘samba’. In creating 100 Keyboards I experimented with the ‘rock’ buttons. I pushed all of them! It’s not part of the official performance at the moment, but I have released those recordings through a Belgian label called Meeuw Muzak.

In the current performance of 100 Keyboards I focus on reverberation and the way it resonates in different spaces. The sounds you hear are different every time.

HAPPY: So will one performance space inspire you to choose a different note to another?

ASUNA: Each room has its own frequency and reverberation. I check it in advance and try to play it differently each time. However, it’s not the pitch or the notes that are important. The important thing is the complex interference and sound phenomena that come with each space.

HAPPY: What drew you towards music when you were starting out?

ASUNA: When I was 12 I started listening to Sonic Youth, Boredoms, and a lot experimental bands and noise music thanks to my sister’s influence. For me, they were the perfect combination of art and music at the time.

HAPPY: Are there any new projects in the works?

ASUNA: I have some new collaborative projects in the works with different artists, including a new recording project with Jan Jelinek and a new sound performance/installation with Minoru Sato-m/s. I think we will announce them early next year. I also have a solo performance of 100 TOYS plus an improvisation with Takahiro Yamamoto.

HAPPY: Thanks for taking the time.

ASUNA: I am looking forward to performing in Australia for the first time. Arigato!

100 Keyboards is premiering in Sydney as part of the Liveworks Festival of Experimental Art this weekend. Grab the details below.