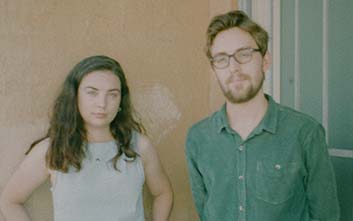 Even if the world starts going to shit, you can be sure Ball Park Music will be smiles all around. From their humble beginnings in the abundantly charming Happiness And Surrounding Suburbs, the Brisbane five piece have easily become one of Australia’s most loved bands.

Seven years later and their fifth album GOOD MOOD, just released, is Ball Park Music at their absolute finest. Bursting with radiant melodies, it felt as every new album strives to feel; like an old friend.

A week before GOOD MOOD hit shelves, we caught up with band members Sam Cromack and Jen Boyce to find out more about the record, how they feel about meme pages, and what gets them up in the mornings.

Animals, A380s and rice paper rolls: we found out what puts the jolly rockers of Ball Park Music in a bloody good mood.

HAPPY: Hi there, thanks for coming along. Your new album, GOOD MOOD, is out in just over a week. I’ve asked this question a million times so sorry for the cliche, but is there still nervousness the fifth time around?

SAM: Yeah, absolutely. I think we’ll always be a bit nervous about it because hard as you try, you can’t really know how people will perceive it. I guess you do everything in your power to make sure you deliver the best thing you can, but sure, I’m always a little bit nervous. But I think the ratio of nervousness to excitement and confidence is leaning slightly higher towards excitement and confidence this time. That is my answer.

HAPPY: What’s different this time around then? Is it just time? Is this the first album you did in your own studio?

SAM: No so Puddinghead, we produced that ourselves and built our own little studio. So we kind of took that approach again, and I think a lot changed for us in our personal lives.

SAM: I don’t really recall ever having a moment where it was like ‘alright, planning for the new album’. The last one, we were really proud of it, but it was kind of our most… I’d say the odd one out in our catalogue. I think that certainly motivated me to just want to start writing again, because it kind of left a funny taste in my mouth. It’s not like I had a problem with the last record, it was just unusual for us so I just wanted to write again. And I don’t know, I felt like that almost coincided with us growing up a little bit, mainly triggered by Daniel, our drummer, becoming a dad. I don’t know, I felt like that really shifted my approach to making art full stop.

JEN: I think that made us all feel a little bit more mature, and also just we felt quite relaxed and quite comfortable in our abilities to do it ourselves, and to complete the vision that we had for the album. So I think it was probably the most relaxed album we’ve recorded.

SAM: I think we just, at number five… I don’t know, that real desperation to innovate or prove yourself is disappearing a little bit. We’re a little more comfortable in our own skin now.

HAPPY: I was actually going to ask if you were riding a high from that last album, because I knew you wrote this one straight after. But it sounds like you were moving away from it, rather than being energised by it.

SAM: Well we had a great time making it, it reviewed really well, and we did our biggest tour off the back of it… and as much as I hate to talk about it I think we had a tiny identity crisis when not a single song got in the Hottest 100 last year. I hate mentioning it, because it feels like I’m just a spoilt brat who’s like ‘I wanna be in the Hottest 100!’ It’s definitely not the only way to measure meaning in our lives, but I think we were just like ‘holy fuck’. Every other album has landed a couple of songs, so I guess it is kind of a measuring stick for where you’re sitting in Australian music. So we were like ‘shit, are we cooked? Are we done? Is this it? Has everyone stopped caring?’ That didn’t kickstart the album, but it was definitely a motivating force.

HAPPY: So I loved the release date announcement for the album. Some great Bunnings-related content there, is there more of that in the works?

SAM: Well I don’t know, the discussions now are moving on to ‘when should we put a bullet in the Bunnings joke?’

JEN: ‘When does this get old?’

SAM: But there’s still a little bit of gas left in the tank.

HAPPY: Awesome. I also saw you came across Triple j Memes for Tash Sultana Loving Teens. Did it feel like you’ve made it, being acknowledged on a meme page?

JEN: I really want to know who runs that page. I feel like it’s got to be someone we know in some way.

SAM: I know, sometimes I have little suspicions that it’s someone in the band.

SAM: I actually don’t think that…

SAM: I feel like that page is showing us the tiniest bit of respect, so I’m happy with it. HAPPY: It’s the best defence. Anyway, as I understand it, Sam, you do the lion’s share of the writing. I wanted to ask if there are Ball Park Music songs where you speak from someone else’s perspective?

HAPPY: People from the band?

SAM: Yeah. On the last record, that was the first time we’d really explored a bit more co-writing, in most cases that was other people coming up with chords and melodies, but not lyrics so much. Dean contributed one full song on the last record which I sang, and then he’s got two full songs on this album. And I sort of work with him to get things done, and shift in a few lyrics, but they’re 99% his writing, those songs. He’s been comfortable with me singing them, which is… I don’t know, is that very common?

HAPPY: I think it’s a similar ratio. 90% the songwriter, 10% other members. But I think that’s quite powerful, singing for someone you’re close to.

SAM: I do, too. I think it’s been a nice change, it’s taken the pressure off me a tiny bit. If I’m like ‘oh, I’ve don’t have to write 10 songs for an album, I’ve only got to write seven and a half or something’, it’s nice. And Dean’s never expressed a strong desire to sing his own songs in the band, I think we’ve always had a pretty clear idea of who does what, and that it’s good to stick to that.

HAPPY: And that didn’t happen before Every Night The Same Dream?

SAM: No, there was maybe a line here or there, a bit of writing, but no, it was… me!

HAPPY: You would have been writing this album last year… 2017 it seemed like everyone was writing music about how the world was ending, which is distinctly not you. Do you try to avoid naysaying as a general rule?

SAM: I feel like I drift between being really positive and really negative! And thankfully the band’s always got a fair bit of spring in their step, so it doesn’t get too dreary. I definitely feel like my mood gets more manic as I get older, way more positive or way more negative. But the album’s called GOOD MOOD, you know, it’s all positive! There is one song called Dreaming of America which is… it’s not wanting to draw any conclusions, I’d say it’s like an Australian watching from afar being like ‘look after yourselves, guys’. So I wouldn’t say it’s naysaying… HAPPY: That’s still a positive message! I’ve listened to it and that was the one song where I thought, ‘are they leaning towards some kind of social commentary?’

SAM: Yep, it’s leaning towards it, without actually wanting to do it. Because I don’t love social commentary, it’s too explicit. Actually The End Times… I mean it’s called the fucking end times, it’s pretty naysayer-y.

HAPPY: Track one of GOOD MOOD!

HAPPY: So there are some songs with an anxious or not-so-positive angle. Do you feel like one type of song allows the other to exist?

SAM: Yeah, I just think that’s life. I don’t know, I feel like I try to express the full spectrum. I was pretty negative on the last record (laughs), I might have gone to my darkest place, but I feel like that’s improved. I feel like I’m an optimistic nihilist now. JEN: I’ve seen this upward change in his mood as well.

HAPPY: There are quite a few really nice love songs in there as well… now that you’ve nailed the Aussie youth audience, are you trying to get played at weddings?

SAM: (laughs) Yeah… you know I went and saw that band Elbow a few years ago, and that was the most, like, not-the-youth audience. I was looking around like, ‘oh my god, is this where we go next?’ Not to rag on their band, but the singer did literally say “Make some noise if you just got married recently!” And heaps of the crowd were all “Yeah!” Holy fuck. So even though we’re big on love songs, that’s not our target audience. HAPPY: Last one. Being from Happy Mag it’s surprisingly rare that I talk to a band who actually makes happy music, so thanks. So last question; what makes the two of you happy?

JEN: I get really overjoyed by seeing an A380 go overhead, like a big aeroplane. Like if I’m outside at Sydenham and an A380 goes overhead, you can pretty much reach out and touch it. And it just fills me with joy! I don’t really know why, I just get so excited. If I’m in a bad mood, I’ve found this place that I can lie down and watch planes, they land just after the bit where you park your car. So they pretty much fly over you and land straight away. It just peps me up, it feels great.

SAM: I do often call you, and you say “I’ve just been watching the planes land”.

HAPPY: Go for it.

JEN: Mate. They make me happy.

HAPPY: Is this what happens when you’ve been in a band this long?

SAM: It does fill me with joy. Every morning I see the plunger on the bench, my wife leaves it half full. It’s like ‘I’m going to give another day a shot!’

JEN: Sam even likes making instant coffee in a hotel room in the morning. Even though it’s going to be shit.

SAM: Don’t discriminate… what do you like? Well Jen loves animals. I know lots of people love animals, but Jen’s love is very deep and respectful.

JEN: I think I like animals more than people…

SAM: I want to think of another trivial thing you like.

JEN: Rice paper rolls was a good one… SAM: No I don’t! Stop this interview! I’m forced to watch The Bachelor season after season! It brings me no joy!

JEN: Oh no, well you do it for your wife then. She brings you joy.

HAPPY: Well I think that’s a great place to hold it. Before we go too deep.

SAM: End on a shameful note.