What's next for Sydney indie band Down The Middle?
Skip to content
[gtranslate]
H Sydney newcomers Down The Middle have hit their early days with a undeniable energy. Straight off the back of their debut single Green Eyed, they embarked on a five-date east coast tour – winding up tomorrow night in Brisbane.

Seems as though we weren’t the only ones falling for Down The Middle. As their tour winds up and the band looks ahead to bigger things, we caught up with their bassist Matt for the latest. 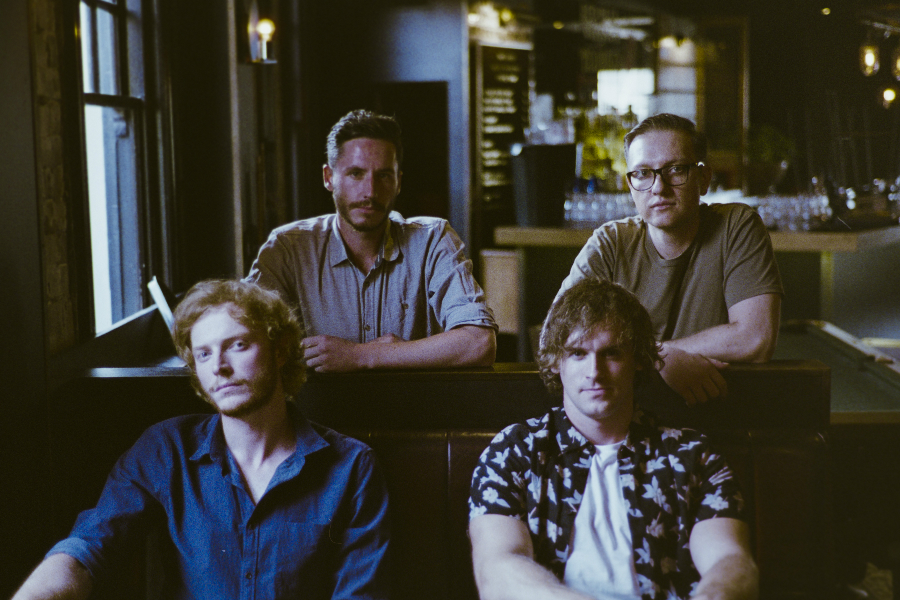 With less than eight months under their belt as a band, Down The Middle are already knocking out east coast tours. We chat to the Sydney four piece to find out what’s next.

HAPPY: Hey, what’s going on? What are you up to at the moment?

MATT: It’s been a busy few weeks touring our debut single Green Eyed so we’re taking a few days to recover. We’ve had some great shows in Sydney, Canberra, Newcastle and Melbourne so getting prepped for our final show of the tour in Brisbane at Ric’s Bar tomorrow night – April 28th.

MATT: Tiernan and Rudi are well settled expats from Ireland and South Africa. They started playing together after meeting at a party and realising they had an appreciation for the same bands. They didn’t know where it would lead at the beginning but when they were putting together songs they were happy with, they got Zach and myself onboard and it ramped up ever since. We’ve only been a full lineup for eight months but have a lot under our belt.

HAPPY: How long had you been jamming before Green Eyed came together?

MATT: Tiernan and Rudi had a good base of songs when we put together the full band so jamming started immediately as we were recruited. The main riff for Green Eyed was something the boys messed around with, but it wasn’t until Zach added drums to it that we saw it as single potential.

HAPPY: It’s out there in the big wide world now. What has the initial reaction been like?

MATT: The initial reaction has been good, we’ve been featured on a few indie blogs and have received positive feedback. It’s interesting to hear comparisons or who people think are our influences. We wanted to have a single out there so people have something to listen to after shows. And all the better when we see them sing along to it.

HAPPY: I really dig the guitar tone on the main rhythm. How are Tiernan and Rudi getting that sound together?

MATT: Being big fans of ’00s indie, there are a few different ingredients. Both play through Fender Hot Rod Deluxes, which are a staple of that time. With one using a Jekyll & Hyde and the other a Tube Screamer, the guitars tend to cut through each other but also give that dual rhythm sound of that era. Tiernan’s using a Telecaster Deluxe (Alex Kapranos style) and Rudi a standard Tele (Bloc Party among others). So definitely a big influence from that time.

HAPPY: I always wondered about songs which describe a physical feature – has the person Green Eyed is about come forward to you to say anything?

MATT: Green Eyed is more about a state of mind than a physical feature. It tends to relate to that jealousy people tend to get these days when they’re just dealing with each other through texts and not getting the full story.

HAPPY: Another one for Tiernan and Rudi – did you experience any of the music scene in South Africa or Ireland before making it to Australia? What was it like?

TIERNAN: Both of us only started playing in a band since we moved to Australia. That’s not to say we weren’t influenced by the music in our home countries. Back home people are very much open to walking into a random venue and hearing a random band. I think that’s what spurred us on to doing something like this – having people listen to what you have to offer. Add a vibrant music scene in Australia to that and it was easy make the decision to do it. The support from back home has been awesome.

HAPPY: You’ve announced the supports on your upcoming tour, was that a bit of fun to put together?

MATT: Yes it was a cool experience going through the process of finding supports for our tour. We love discovering new bands and we’ve definitely got a list of bands that we can call on now for future shows. Supports outside of your home town can mean the difference between five and 50 people showing up at your gig so we made sure that we connected with bands that had a solid local following which has made a big difference.

HAPPY: What’s coming up next, after the tour? Can you tell us anything about any songs you have in the bank?

MATT: We have a long list of songs that we want to track and release. We’ve been working on them for a while but getting Green Eyed out in the open was the focus. Hoping to start work on an EP pretty soon. We’ve also just found out that we’ve been selected for the Frankie’s Pizza Battle of the Bands which is going on throughout May. We’re up on May 2nd so really keen to give it a crack and play what we’ve been working on to a new audience.

HAPPY: Looking forward to it! Cheers for the chat.

Catch Down The Middle live: PREMIERE: You'll be unable to resist dancing to DUAL's new single On Your Own Wild gigs and wacky venues: Down The Middle and The Vacant Smiles interview each other

Down the Middle shine on Green Eyed, a new track to get your blood pumping