While summer is coming to it’s end, things are just starting to warm up for Sydney-based act Wolf Cola (is that an Its Always Sunny reference?). Inspired by the likes of Ty Segall, Three Oh Sees and the Beach Fossils, it comes as no surprise that Wolf Cola’s sound is heavily reminiscent of surf music from the 60’s. Although they are fairly new to the scene, the duo’s pronounced talent and unique style would have you believe otherwise. Tom and Callum originally joined forces to form Wolf Cola on Valentine’s Day of 2013 (such romance), but it wasn’t until October of the same year that the boys decided on, and established their current sound. Described by Tom himself, as ‘garage/surfy pop’, Wolf Cola are without a doubt the cure to your post-summer blues. Together, they have written a total of twelve songs with hopes of releasing an album soon.

If you’d like to catch the Wolf Cola fellas (before everybody else does), their upcoming shows are as follows: 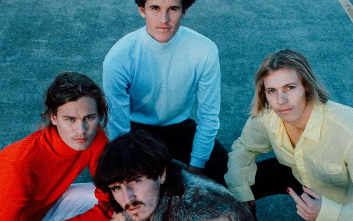 PREMIERE: Melbourne outfit Girlatones bring a sunny side to garage rock on Fitting In Well Cats, rollerblades, Karl Stefanoic and dreamy guitar pop, Morning TV have all the ingredients for the perfect summer breakfast