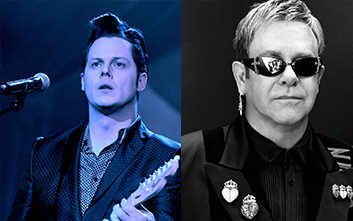 Last week Q-Tip announced A Tribe Called Quest’s next record in a letter posted to Facebook. Yesterday, in an interview with The New York Times, Q-Tip was joined by Jarobi White and together, they released some juicy details on the upcoming LP, including it’s title and a red-hot list of collaborators.

We Got It From Here will be released through Epic Records, and features all four original Tribe members including the late Phife Dawg. The entire record was put together from sessions at Q-Tip’s home studio in New Jersey. Haunted by the loss of Phife Dawg and swelling with some amazing collaborators, the world is going crazy in anticipation for A Tribe Called Quest’s first record in 18 years.

The collaborators on the record will include André 3000, Kendrick Lamar, Jack White, Busta Rhymes and goddamn Elton John. It will be the group’s sixth studio album, and it’s pretty easy to assume that it will be just as hyper-successful as the rest.

It will be the first record in 18 years, and the first they’ve released since the tragic and unexpected passing of Phife Dawg. For more information about the motivations and surprisingly sombre story behind We Got It From Here, you can read Tribe’s full NYT interview here.