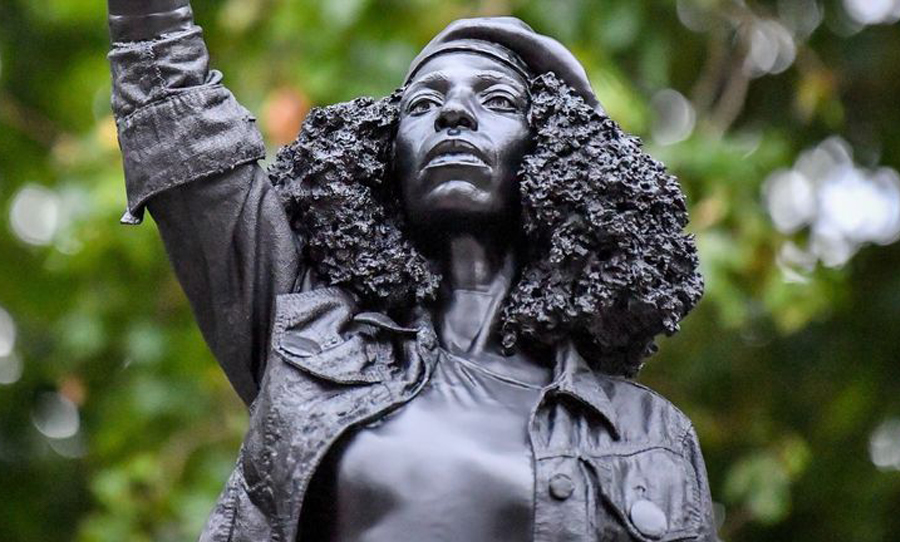 In a pre-dawn operation, artist Marc Quinn has installed a sculpture of a Black Lives Matter protestor in the middle of Bristol. The resin and steel sculpture, named “A Surge of Power (Jen Reid) 2020”, currently stands in the place of UK slave trader Edward Colston’s monument: a statue which was toppled by demonstrators back in June.

“This sculpture captures a moment,” Quinn explained to Jen Reid, the protestor depicted in the sculpture. “It is such a powerful image, of a moment I felt had to be materialised, forever.”

A Bristol artist has replaced a statue of a UK slave trader with a powerful sculpture of a Black Lives Matter protestor. While the installation is unfortunately temporary, the piece is a stirring reminder of the ongoing movement.

“My friend who knew this showed me a picture on Instagram of Jen standing on the plinth in Bristol with her fist in a Black Power salute,” Quinn stated about the sculpture. “My first, instant thought was how incredible it would be to make a sculpture of her, in that instant… It happened in the middle of the news and the worldwide ripple effect from George Floyd’s killing – all of which I had been following.”

Collaborating heavily with Reid on the project, Quinn states that the work was intended to re-ignite conversations about racial discrimination, rather than to be a permanent monument.

More like this, please. And let’s make this one permanent.

“We want to keep highlighting the unacceptable problem of institutionalised and systemic racism that everyone has a duty to face up to,” he added. “This sculpture had to happen in the public realm now: this is not a new issue, but it feels like there’s been a global tipping point. It’s time for direct action now.”

The movement to remove statues of colonial figureheads is still ongoing across the world, particularly in Australia. A friendly reminder that the petition to replace all of Tennessee’s confederate statues with Dolly Parton is still gaining traction.