An oil painting vandalised by Banksy to draw attention to climate change is headed to auction and predicted to sell for up to $7 million.

The artwork, titled Subject to Availability was formally created by German-American painter, Albert Bierstad in 1890. His oil painting of Mount Rainier National Park in Seattle highlighted the snowy peak of the Seattle mountain range.

Putting his own spin on the classic image, Banksy highlights a climate-conscious take on the image, adding an asterisk to the painting with the note, “Subject to availability for a limited period only.” The ‘limited period only’ refers to Mount Rainier’s glaciers that are melting at six times the historic rate. Researchers are looking closely at Mount Rainier to study the effects of climate change. They predict that climate change will devastatingly destroy habitat for flora and fauna species up and down the mountain range.

Katharine Arnold, the co-head of postwar and contemporary art at the establishment holding and auctioning Banksy’s latest work, Christie’s, said that: “Banksy’s witty dialogue with the art historical canon brings the painting sharply into the current context of the global climate crisis.”

Addressing the National Park’s climate crisis, Arnold added that, “ten years on from its creation, the idyllic park it depicts has already been closed to the public since February 2020 due to severe flooding and landslides.”

It’s estimated that Subject to Availability is expected to bring in between £3 million and £5 million via Christie’s. At an auction last year, a 2005 Banksy parody of a Monet painting, which included trolleys and an old traffic cone, smashed all expectations and estimates when it sold for a whopping £7.5 million (13,362,525.00 AUD) at an auction.

Subject to Availablity will be on view at Christie’s King Street location in London until 7th of May as part of the exhibition: ‘Off the Wall: Basquiat to Banksy.’ The exhibition will also include 49 works of street art and graffiti from artists such as Jean-Michel Basquiat, Kenny Scharf, and Os Gemeos.

Banksy’s painting from 2009 called
“Subject to Availability” will be a highlight of Christie’s June sales. The painting, which is from a series of oil paintings that were “vandalized” by the artist is estimated at between $4 million and $6.9 millionhttps://t.co/RepZ5tcvKO pic.twitter.com/iAw4jSMAqJ 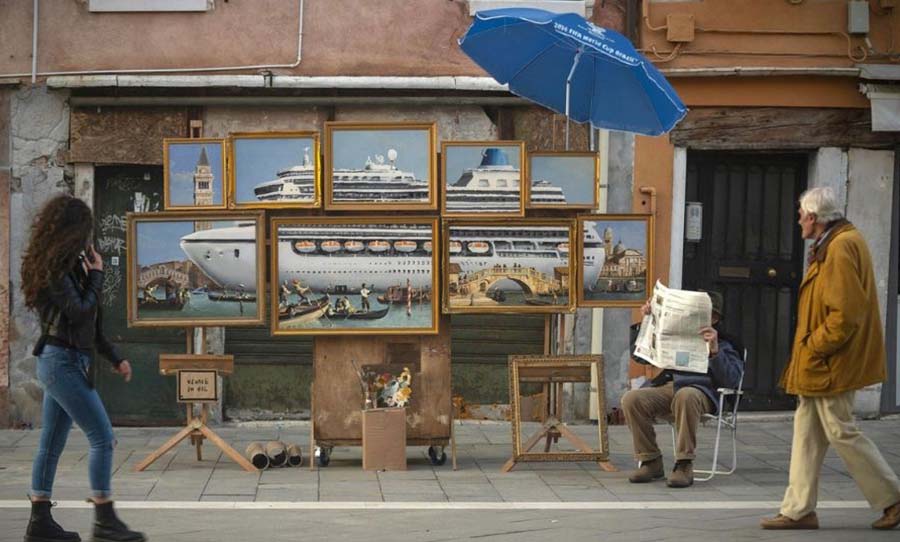 The Venice Biennale didn't invite Banksy this year, but he showed up anyway