Brigid Berlin, a fashion icon from New York’s underground art scene in the 60s and 70s, has died aged 80. She was a close friend of Andy Warhol’s, starring in many of his films and distributing unconventional art alongside him.

Her death was confirmed by Vincent Fremont, who was a colleague of Berlin’s while she worked at the Silver Factory as a receptionist. Fremont was an executive manager at The Factory for almost 15 years, sharing a mutual longterm friendship with Warhol. Brigid Berlin was a key fixture in the New York underground art scene, befriending Andy Warhol in 1964 and appearing in many of his unconventional films.

Brigid Berlin was a part of Warhol’s Superstars, a selection of free-thinking misfits who helped Andy create progressive art. The radical nature of the Superstars was that they were made up of unique personalities; discards who were marginalised from the conservative norm at the time.

While most struggled with serious drug addictions, the Superstars featured in many of Warhol’s films and helped to try and stamp out gender and identity divisions in society.

Berlin was also known as Brigid Polk, due to her lust for administering injections of amphetamines and Vitamin B to herself and others. She rose to fame in 1976 when she is seen ‘polking’ herself in the backside with an amphetamine dosage, mid-monologue on Warhol’s Chelsea Girls documentary.

“I was such a part of it, it seemed to be so normal then. I never felt like a groupie. Andy was just somebody I saw every day of my life and talked to every night on the phone. I didn’t have to go out with Andy at night, after I’d been with him all day long,” Berlin said in a 2015 interview with AnOther.

Berlin was also famous for her Tit Prints, the canvas artworks that solidified her recognition in the conflicted art world. They featured the mark of her paint-dripping breasts, reshaping the art of sex almost instantly. She also worked in the phallic art genre, compiling The Cock Book, which contained cartoons and sketches of male genitalia she stumbled across. The three-volume scrapbook sold for $175 000, featuring the penis drawings of Leonard Cohen, Andy Warhol, Jasper Johns, Jane Fonda and Larry Rivers, among others. 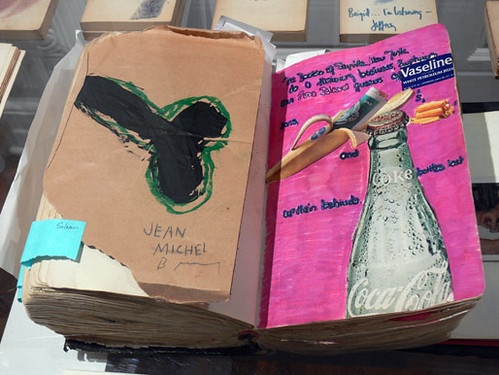 Berlin also pioneered the Polaroid camera, creating some of the first self-portraits using double exposure long before the ‘selfie’ became a major thing: “I got into Polaroids even before Andy got into them because of some pictures I saw in Vogue in the early 60s by Marie Cosindas,” she explained in a 2015 Artforum interview.

Carrying her recorder everywhere, Berlin sought to document as much as she possibly could during her time on the brink of the New York underground art scene: “Berlin wasn’t recording for posterity; she was recording for the present,” wrote Rachel Churner in a 2015 Artforum review. “Capturing it all was a means of validating her presence.”

Andy Warhol once even praised Berlin as the true creator of his art but removed his comments after he received backlash from critics. Brigid Berlin was a staple name on the New York underground hip scene, “never a groupie, always an insider”, pioneering an array of free-thinking ideas and seminal artworks.