From humble beginnings emulating the sounds of the Commodore 64 to releasing some of the world’s most popular drum sequencers, we walk through Elektron’s fabled back catalogue.

Elektron has been an international mainstay in the production workspace for over two decades. They’ve also found one of the most intriguing ways of maintaining relevance: by crafting a new world for their instruments to exist within.

Its instruments provide inspiration to electronic icons like Autechre, and The Knife — and whilst the company wasn’t built on the most traditional of footings, they’ve been able to make a solid dent in the music industry with their hardware. Today we’re looking through some of their more iconic historical instruments, from 1998 to today. 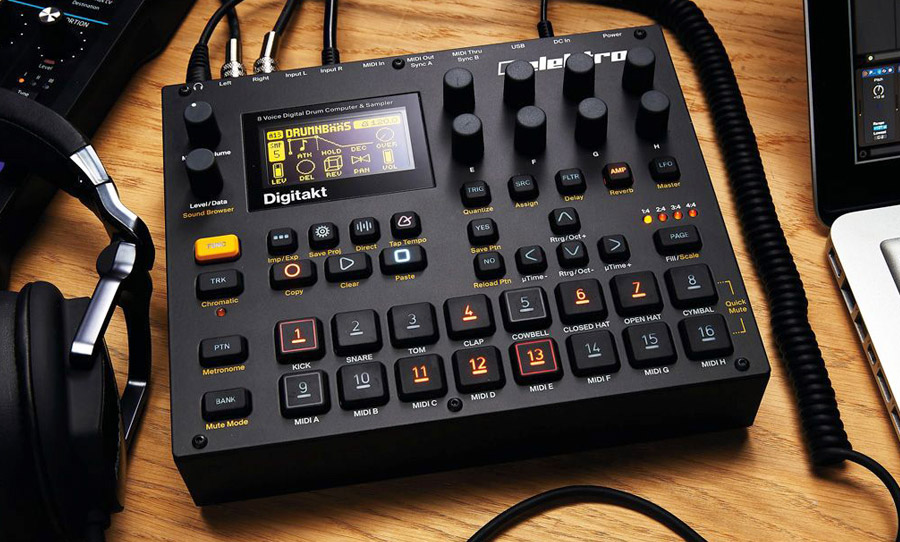 Initially, Elektron was nothing more than a company name established to shell the funds that a small group of friends were able to make from one of their university projects. Daniel Hansson, Anders Gärder and Mikael Räim all shared a computer science course together, and after finding all of the other options for one particular assessment too easy, they put their brains together to craft a synthesizer.

They developed this synth around the notorious SID chip, which could be found as the main sound processing unit in the Commodore 64 gaming console. Though it was a powerful piece of kit, it was relatively easy to develop an interface for, and the SidStation would award the trio great marks on their course.

Since the trio were young websurfers of the early internet age (around 1997), they were a part of many online music forums where they’d post progress reports, and answer questions from their online peers. Despite the somewhat difficult to navigate interface, the chiptune sound palette of the SID card was something that several forum-goers had a certain nostalgia around, which invited a large amount of interest onto the project after its completion.

The boys made a trial run of ten units, and once they sold out around the globe, they took their synth to the public under the Elektron name. The only issue was that whilst they were netting a profit from their uni experiment, SID chips had been out of production for almost a decade, meaning that the remaining stock was finite, and the gang would be damned if they ended up gutting a Commodore 64 just for the sound chip. Thus, they had no choice but to keep producing new pieces of hardware if they wanted to keep the Elektron brand afloat.

Committed to keeping the dream alive, Elektron began producing some of the most iconic pieces of hardware of the early naughts.

They began with the Machinedrum — a legendary drum sequencer that used four different synthesis engines: a TRX that emulated the classic Roland TR series, a 12-bit sample playback synth, an FM synthesizer, and a parameter lock engine that gives movement to the sound.

You get the option of crafting each individual sample in your drum rack, with up to 100 ‘machines’ to customise and effect in your own way — presenting one of the most intricate digital drum sequencers ever produced. This was followed up in 2005 with additional functionality in the UW model, whose burly sequencer tied it all together.

The Monomachine was also released in this period: a machine with a less percussive focus and five unique synthesis methods, including the SidStation’s SID chip, a VO voice engine, FM+ sounds like the ones featured in the Yamaha DX series, a versatile DigiPro machine, and a SuperWave engine.

It also included the Machine Series’ beautiful onboard effects, allowing users to pull incredible sounds up from the guts of this legendary unit.

By the early 2010s, Elektron had well and truly solidified themselves as a force to be reckoned with in the hardware music game, with a mostly new team at the helm. The original founders were no longer part of the company — with Hansson’s unfortunate passing, Räim’s move to work for Volvo, and Anders Gärder’s pivot to fellow Swedish audio powerhouse Teenage Engineering. But the new team was keen to continue Elektron’s legacy, and opened the gate with a focus on analog technology.

The Analog Four was the first in this series- a four-voice analog synthesizer with digital controls. Being controlled digitally allowed for more precision in the voicing and sequencing — especially with Elektron’s mainstay 16-step sequencer laid out at the bottom of the machine.

It could also be used as a CV input for any rack units or legacy analog synthesizer which had it. It featured a single octave keypad that could be used for input — an idea which would be extended with 2013’s Analog Keys model.

It can’t be understated just how strong these analog models are. The textures and tones that they create lend themselves to such a diverse roster of soundscapes, being used by artists like Thom Yorke, Aphex Twin, SOPHIE, and even on the soundtrack for 2016’s DOOM.

The Analog Rytm was released to close out this series in 2014, with a focus on sampling and drum sequencing, but it wasn’t until 2017 that Elektron really left another indelible imprint on the sequencer market.

In 2017 Elektron released the Digitakt — an audio workstation and drum sequencer which has split producers down the middle. Many are deeply dissatisfied with their Digitakt because of its arduous SidStation-esque menus and less-than-intuitive sample/sound organisation, mono-only sampling, lack of song mode, and no sample time-stretching. Despite all this, however, it’s also deeply beloved.

Elektron brought an incredibly in-depth sequencer to the table, whose tiny body and various knobs can be used to create some intricate and evolving beats. It features an onboard sample recorder, where you can ingest any sound you have at your fingertips — ready to be edited and manipulated in various levels of depth within the unit — where they can be performed chromatically, filtered, and arranged into patterns of any genre.

In Elektron style, the Digitakt was followed soon after by the Digitone — the musical cousin of the sequencer featuring an 8-voice polyphonic digital synth as well as much of the same hardware. Both of these units have acquired legendary status in the production world, and despite their size remain some of the most powerful sequencers available in this generation.

With such a legendary back catalogue of instruments, Elektron has created a sizeable legacy in just 20 years. What began as a quick way to cash in on programming smarts paved the way for a future of innovative hardware that rivals the bigger players in the industry, and for good reason. After a five year beta, they finally released Overbridge in 2020 — an Elektron audio workstation that allows their hardware to be controlled eternally via computer and are still releasing Digitakt style hardware under their ‘Model:’ range.

While we wait for the next evolutionary leap from Elektron, the back catalogue is enough to bring inspiration to any artist. Feel free to check out any of their product videos — all fronted by Cenk the legendary brand rep, or check out the website for deeper specs on their units.